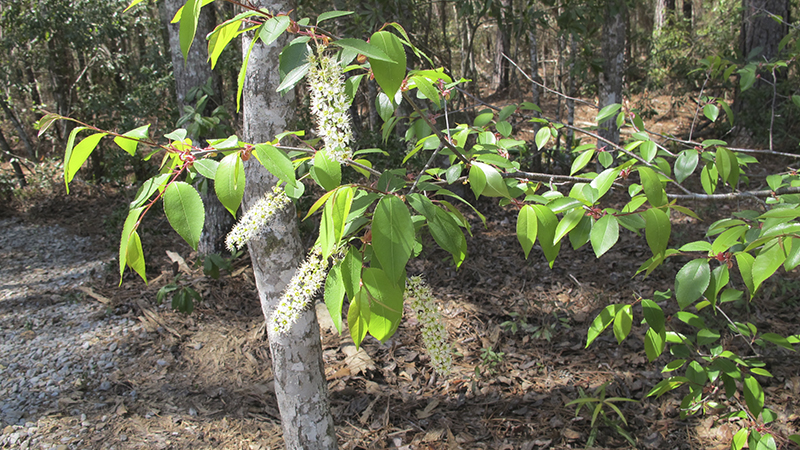 A black cherry bush is in bloom at the Crosby Arboretum. While the berries can be used in cooking, the leaves and bark can contain high concentrations of a poisonous substance. Submitted Photo

By Patricia R. Drackett, Director of the Crosby Arboretum and assistant extension professor of landscape architecture with the Mississippi State University Extension Service.

Curator Jennifer Buchanan sent me a great photo this weekend of picking dewberries. Have you been taking advantage of the many spring fruiting plant species found in Pearl River County?

Dewberries will ripen in mid to late spring, before blackberries, which have longer, stouter canes. Many of us know dewberries as those pesky little briars that pop up in our garden which can be quite “ouchy” to remove. But they can be tamed and pruned to ramble in a thicket or cottage garden, yielding delicious spring cobblers, or perhaps jam or jelly such as is sometimes crafted by Myra Smith, a regular at our November Piney Woods Heritage Festival.

I admire those with the interest and patience to pursue their passion to “forage” wild foods. I’ve often said I’d rather have a good friend interested in the subject who’d invite me over regularly for pre-tested meals, than to have to locate the ingredients on my own. But many wild edibles are easily identified, such as muscadines, blueberries (often called huckleberries), and blackberries and dewberries. Mayhaws (fruiting now!), crabapples, and persimmons are also excellent native fruits to explore. Just hunt up a good recipe, and invest in some sugar.

Consider the need for a positive identification before collecting or consuming a plant collected in the wild. I remember the story told by Dr. Wayne Morris, a botanist long connected with the Arboretum, who leads occasional field walks. His cautionary tale involved collecting a specimen he believed to be a water hickory (Carya aquatic), but had recognized too late that he had snipped a branch of poison sumac (Toxicodendron vernix). The moral of the story is that even highly knowledgeable individuals can make an error now and then, so please practice caution. Don’t  ingest a plant without being certain of its identity.

At our Hillside Bog Natural Area, we have Gaylussacia dumosa and Gaylussacia mosieri, two shrubs that, like other native blueberries, are often called huckleberries. They are relatives of blueberries and cranberries. Both plants are clonal shrubs with underground rhizomes, with the ability to resprout following fast-moving, low intensity fires historically caused by lightning strikes, and today, by prescribed burning.

Black cherry (Prunus serotina) has a noticeable horizontal “ringed” appearance on its bark and is the source of handsome cherry furniture handed down from generation to generation in Deep South families. Although the fruit is consumed by many birds and other wildlife, and used traditionally to make pies, jams, jellies, and wine, its poisonous compounds (cyanide-like glycosides) become concentrated in the leaves, seeds, and bark, especially during the fall, and can poison and cause the death of livestock animals.

Red bay (Persea palustris), and swamp bay (Persea borbonia) are related to the commercial bay from Europe, as well as cinnamon and sassafras. These trees have very aromatic leaves that can be used to flavor foods such as spaghetti sauce or stews. Sassafras albidum has been used to flavor Cajun gumbo and stews. Rhus copallinum, winged sumac, has fruit consumed by many wildlife species. Juice from the fruits can be used to prepare a lemonade-like beverage.

Smilax laurifolia, commonly known as laurel brier or greenbrier, has a high wildlife value, even though we may dislike its presence in our garden beds, because of its long, thorny shoots that search out the unsuspecting legs of passersby. White-tailed deer and other wildlife browse the young shoots and leaves. Beavers sometimes eat the underground tubers, and bobwhite quail, wild turkey, and over 40 species of songbirds relish the fruits.

Do you enjoy writing? Or, have you always meant to start writing your memoirs? Make plans to join us for some outstanding writing workshops this Saturday with Mary Beth Magee. Call now to sign up for “Bringing Nature to Life in Your Writing”, on April 28, from 9:00 to noon, or for “Getting Started on Your Memoirs” from 1:00 to 3:00 p.m. The workshops are $5 each for members, and $8 for non-member adults.

Space is limited, and reservations are required for our programs to prevent overcrowding.  Call 601-799-2311 to reserve your seat.

For more information on visiting, call 601-799-2311. The Crosby Arboretum is located in Picayune, I-59 Exit 4, at 370 Ridge Road and is open Wednesday through Sunday from 9 a.m. to 5 PM. For more information, see www.crosbyarboretum.msstate.edu. 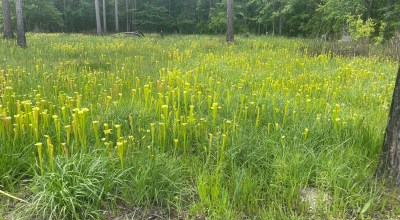 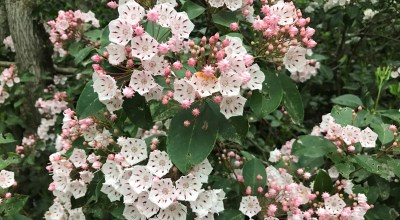 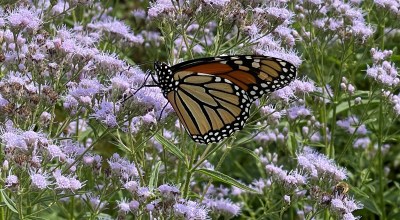