Infant mortality in Mississippi can be prevented 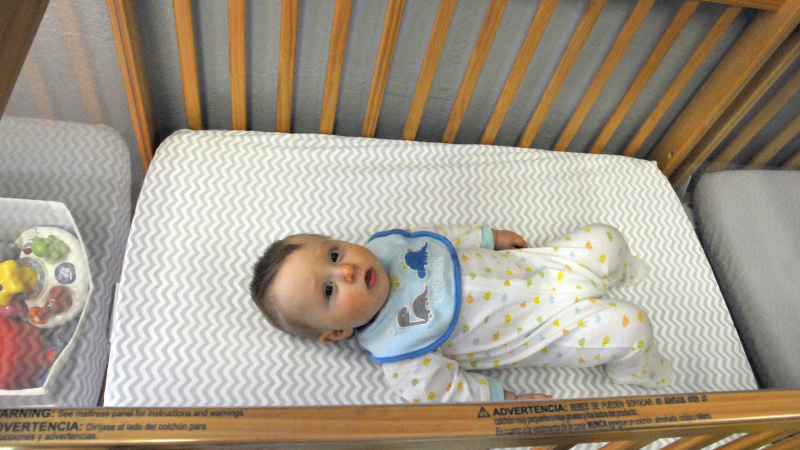 This 7-months-old, lies in a crib at a local daycare free of any pillows, blankets or stuffed animals that may cause him harm. Photo by Leah McEwen

Mississippi is plagued with an unfavorable infant mortality rate. But this problem can be solved by better educating new parents.

According to a study released by the Mississippi State Department of Health, in 2015 there were 590 child deaths – 60 percent of which were infants. While the rate of child deaths across the nation has declined since the 90’s, Mississippi’s rate continues to increase. In 2014 there were 523 child deaths, increasing to 590 in 2015.

Of these cases, the study deemed that 220 of them could have been prevented.

The majority of deaths in children ages 1 -17 were due to car accidents, suicide, homicide and drowning. Most infant deaths occurred because of unsafe sleeping environments, the study shows. Of the 74 preventable infant deaths, more than 40 percent were due to asphyxia.

According to the study, “asphyxia deaths often occur as a result of suffocation, overlay, wedging, entrapment or strangulation in an unsafe sleep environment.”

With care and research, many of these unfortunate deaths can be prevented.

If a mother is actively trying to conceive, Denny said that it is important to visit a doctor for a pre-conceptual visit.

During the visit, the soon-to-be mother would be tested for illnesses that could lead to complications during pregnancy. In addition, the mother could be given vaccinations against the flu and Tdap, which would give the infant additional immunity after birth. Prenatal vitamins are also important while trying to conceive, since they reduce the risk of serious fetal illnesses.

“You want to do preventatives from day one,” Denny said.

Once the baby is born, the following steps can help prevent the risk of sudden infant death syndrome and other causes of death.

Denny said infants should always be put to sleep on their back, because studies have shown that the rate of SIDS is higher when a baby sleeps on his or her stomach.  To create a better sleeping environment, infants should be placed away from soft objects such as blankets, pillows or stuffed animals. They should also not be allowed to sleep with the mother, she said, since co-sleeping often increases the risk of death.  Denny said she highly recommends that mothers breast-feed their children for at least 6 months.

Breast-feeding has been shown to not only raise a child’s IQ, but also provides certain immunities to the child.

Smoking should never be allowed within the home of an infant, since the smoke increases the rate of SIDS and the risk of developing serious infections, Denny said.

Lastly, Denny recommended that all infants be kept up-to-date on their vaccinations. In spite of concerns that vaccinations might cause negative side effects, Denny said there is no reliable research to support that claim.

She said that when comparing  the infant mortality rate from previous years when vaccinations were not available to the rates of today, the benefits are obvious.