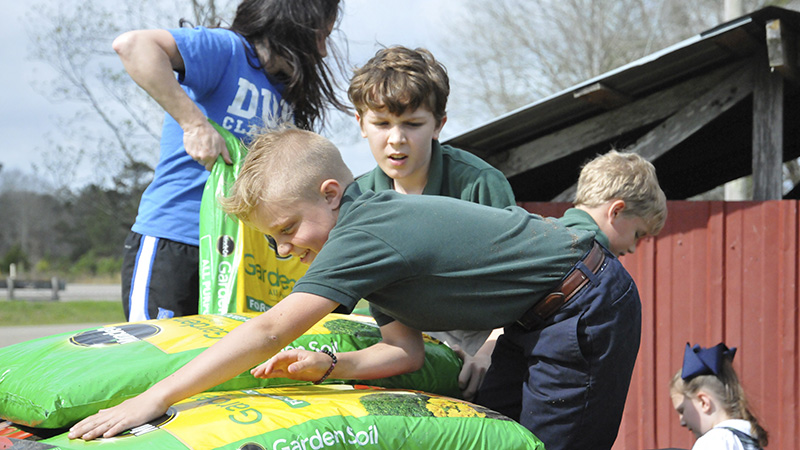 UNLOADING: Jenson Abercrombie and James Toler work together to help Adrienne Spence pass bags of soil down to waiting students. By Leah McEwen

On Thursday, Heritage Christian Academy in Picayune held its first school-wide gardening event. Students from every grade participated in the project, which was organized by Adrienne Spence.

Students filed out grade-by-grade during their P.E. break. Older students came out first and helped Spence lay tarps for the raised garden. Third and 4th grade students helped spread soil over the tarps and flatten the surface. Finally, the younger students planted sprouts to finish the project.

The students appeared ecstatic to be able to grow their own vegetables. A few of them were concerned about taking their shoes off and getting into the damp soil, but most leapt into the garden bed. Teachers overseeing the project did their best to keep the students from getting too dirty, but by the end a number of students were coated head to toe with wet soil.

Some students took their responsibility very seriously and meticulously smoothed the soil and dug holes for the plants. Others did cartwheels and threw handfuls of dirt at their classmates. About halfway through their work, the 3rd grade class jumped around and sang “Old MacDonald Had a Farm.”

About a third of the students raised their hands when they were asked if they had a garden at home.

Students planted a variety of produce, including squash, tomatoes, bell peppers and lettuce. Spence said that they will eventually plant watermelon and cantaloupe as well.

Now that the garden has been planted, Spence said she and the students will work twice a week to pull weeds, water plants, add fertilizer and help with harvesting. Once the vegetables are ripe, Spence said that they plan to either cook them for the students’ lunch, or donate them to the community; depending on what day of the week they are harvested.

Academy Director Sandy McCardle said that since the school moved to its new campus, staff are always looking for new and engaging activities for the students. As part of that effort, Spence, a local nurse practitioner and mother of one of the academy’s 4th graders, presented the idea of a community garden. McCardle jumped at the opportunity.

Spence said the idea of a school garden came to her while doing research into childhood obesity as part of her doctorate dissertation. She said studies have shown that children are more likely to eat healthier if they grow their own food. The excitement of planting seedlings and waiting for them to grow encourages children to try things they normally wouldn’t eat at home. Spence said she hopes this project will encourage the children to think differently about eating healthy and will help them develop habits that will stick with them for life.

“I hope more than anything it gives kids perspective on working on something and seeing the fruits of their labor,” Spence said.

Spence said she hopes the garden will be something students can work on for years to come. This week they finished the raised garden, but plan to eventually plant an in-ground garden and construct a greenhouse as well.