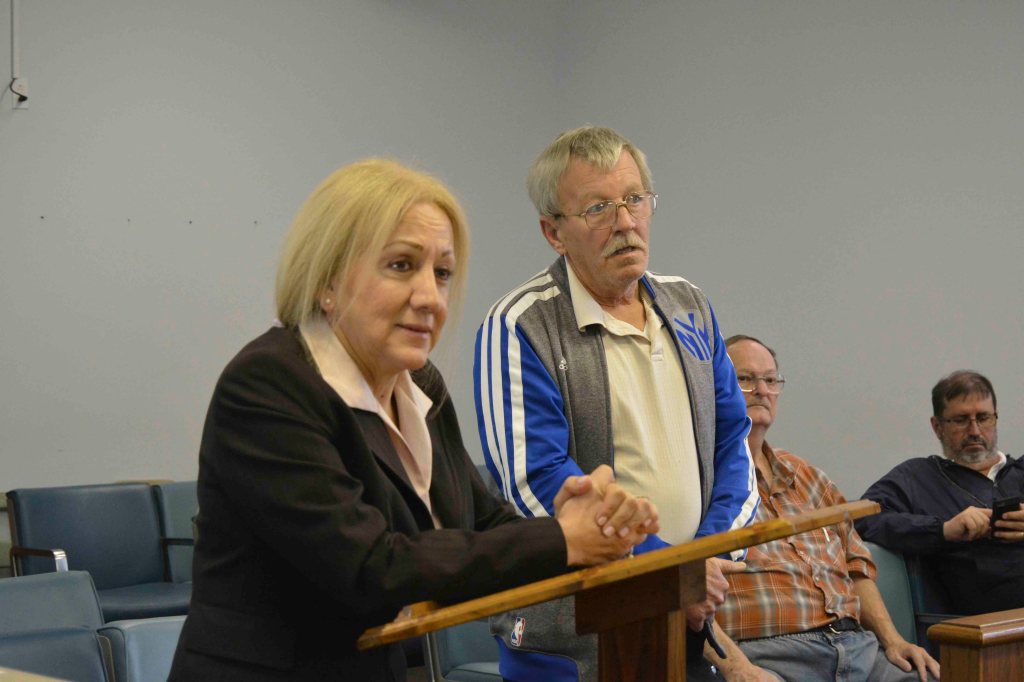 Carriere residents Jacqueline Clark and Nicholas Lorenz share their concerns about the potholes on Shirley Wise Road, where they both currently reside. Photo By Mrudvi Bakshi

Smith said about 80 volunteers helped remove garbage across the county.

He said this year’s response motivated them to organize cleanups twice a year.

In other matters, the Board approved a motion to build a full-time fire station near the Lenoir Rowell Correctional Facility on Savannah Millard Road.

Manley said construction of the new station, which will house a class A fire engine, will be supervised by McNeil Volunteer Fire Department Chief Donny Leonard.

He said construction of the station is estimated to cost about $30,000 and will be built using funds from the McNeil Volunteer Fire Department’s budget.

In another matter, Carriere residents Jacqueline Clark and Nicholas Lorenz spoke to the Board and Road Department Manager Charlie Schielder about potholes on Shirley Wise Road.

Clark, who moved to Carriere from California in 2011, said the road has seriously deteriorated over the years.

Clark said that while she credits road department employees for their timely maintenance of the road, the holes are filled with uneven patches of asphalt, leaving the road bumpy and difficult to drive on.

She also said the road department fails to fill all potholes at the same time.

Clark said she spoke to the previous supervisor before Malcolm Perry was elected to District II regarding resurfacing of the road.

“All we want is an honest answer if you guys have the budget, what does it take and how long will it take,” Clark said.

Lorenz said years ago the road department replaced a broken pipe under the road and dumped loose gravel on top, making for a large speed bump.

Clark said although the entire stretch of the road is in bad shape, it appears only that holes in front of homes where residents complain are patched.

“All the time the whole road is nothing but potholes and they keep coming out 2-3 times a month and fix the same ones they did before,” Lorenz said.

Board Vice President Hudson Holliday said there are about 1,100 miles of county maintained road and county employees do so to the best of their ability.

Perry said there are several roads that need maintenance across the county and the road department is working every day to keep up.

“It may not be on your road but the road department does something every day,” Perry said.

Road Department Manager Charlie Schielder said because there are so many roads in the county in need of maintenance, the department depends on the public to report problems.

Hudson said the Board is constantly investing time in creating the best environment for citizens of the county.

For more coverage of Monday’s meeting, see Wednesday’s edition of the Item.