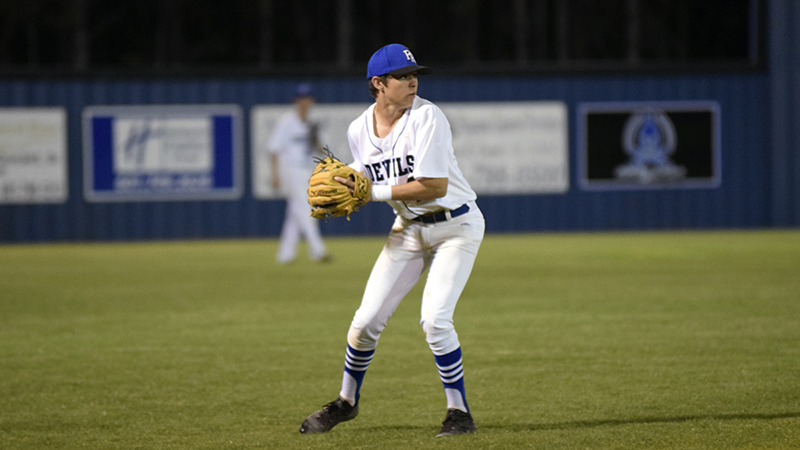 Halfway through the season: PRC’s Mason Treat looks down the field against North Pike. The team will face Picayune Tuesday at 7 p.m.

CARRIERE — Two runs in the fifth inning proved the difference for the Blue Devils, who defeated North Pike 2-0 in a region contest Friday night.

In the bottom of the fifth, an error at third base and a wild pitch by North Pike’s Kole Alford allowed PRC’s Mason Treat to make his way to second base. After a base hit by Tristan Schlottman, Treat reached third.

In the next play, North Pike’s Alford threw the ball to third baseman Cade Killingsworth. But a mishandled catch by Killingsworth allowed Treat to make his way to home plate, scoring the first run of the game for PRC.

The next batter, Austen Izzio, batted the ball into left field and teammate Schlottman scored for the Blue Devils.

With runners on third and first in the top of the seventh inning, PRC’s Austin Dean struck out one batter and a groundout at first brought the game to an end.

“I think we found our number two pitcher tonight in Dean,” PRC Head Baseball Coach Neil Walther said. “Heading into the seventh inning, he had only allowed one hit. His command at the mound was great and he had less than 78 pitches through six innings. The biggest question for us at the beginning of the season was our pitching and so far, it has been really good.”

Dean pitched a complete game and only allowed three hits and struck out five batters.

On Saturday, the Blue Devils lost 11-1 against Gulfport and 12-2 against Faith Academy (AL).

PRC will be back in action Tuesday, when the team travels to Kent Kirkland Field to take on the Maroon Tide. The game is set to begin at 7 p.m.

“Picayune is a good team and they play hard every game,” Walther said. “It should be a great atmosphere Tuesday night and I can’t wait for it to get here.”

Against Harrison Central, Picayune scored twice in the first, fourth and sixth inning. Tyler Penton was 1-for-3 with a double and two RBIs, Luke Smith went 1-for-1 and Shaun Anderson, Elisha Hickman and Chad Stockstill each batted 2-for-4.

In the game against West Harrison, the Maroon Tide held a 3-1 lead after four innings. The team went on to score seven runs in the fifth and one in the sixth, which brought the game to an early end. Chad Stockstill and Logan Ledet each went 1-for-3 and combined for six RBIs, Shaun Anderson was 1-for-3 with an RBI and Kade Turnage batted 1-for-2 with an RBI.

Hickman pitched the entire game for the Maroon Tide and allowed five hits, one run and struck out four batters.

Four runs in the first and third inning each and one in the second and fifth helped Poplarville (6-8, 3-1 Region 7-4A) win its third district game of the season.

On Saturday, the Hornets also defeated Richton 19-9 but lost 13-12 against Marion.

Poplarville will be back in action Tuesday, when the team hosts Lawrence County at 7 p.m.