PRC, Picayune baseball teams off to a good start 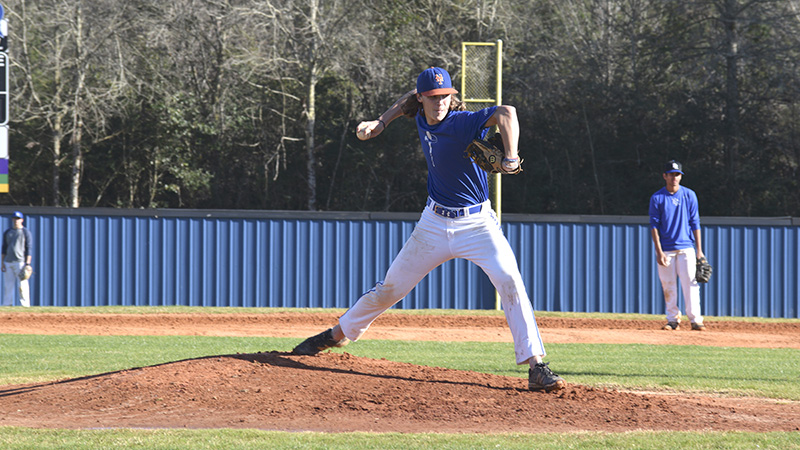 Solid night at the mound: PRC’s Rigell Robinson struck out 14 batters and only allowed one hit against Hancock County Thursday night. Photo by Victor Tun

In the second game of the night Thursday, six runs in the first three innings of the game helped the Blue Devils earn a 7-0 victory against Hancock.

On the mound, Rigell Robinson pitched a complete game and struck out 14 batters, allowing one hit and one walk.

Saturday, the Blue Devils scored 10 runs in the first inning and added one more in the second to defeat the Hornets 11-0.

Lee went 2-for-3 with three RBIs and Tristan Schlottman batted 1-for-3 with an RBI. Mason Treat, Austin Izzio, Robert Shoemake and Zach Roussell each had an RBI for the Blue Devils.

Dean earned the win on the mound after pitching for three innings, in which he allowed two hits, two walks and struck out three batters. Shoemake and Blake Craft pitched one inning each to end the game.

Meanwhile for the Hornets, Canaan Ray was 2-for-3 and Tynes, Smith and Peytan Graham each batted 1-for-3.

Action resumed Saturday morning when Picayune scored three runs in the bottom of the seventh inning and defeated Hancock 6-3.

After two innings of play, the Hawks led 3-1 but a run in fifth and sixth inning by Picayune helped the Maroon Tide tie the game at 3 runs each.

For the Maroon Tide, Penton went 3-for-4 with an RBI, Anderson was 2-for-3 and Burnette batted 1-for-4 and had three RBIs. Logan Ledet and Hickman added an RBI each for Picayune.

On the mound, Dylan Ramsay earned the win after pitching for three innings and striking out four batters and only walking one.

The Maroon Tide will travel to Ocean Springs Tuesday and will be back at home Thursday when the team faces Stone High School.

“When it comes to pitching and playing defense, we did well, so we’ll continue to improve on that aspect of the game,” Picayune Head Coach Cody Stogner said. “We also had 11 hits in both games and even though I like seeing that statistic, I would like to see us start applying more pressure at the beginning of the game, instead of waiting until the end. I was proud of how our guys played and even though we were down early in both games, they never gave up and continued to battle until the end.”