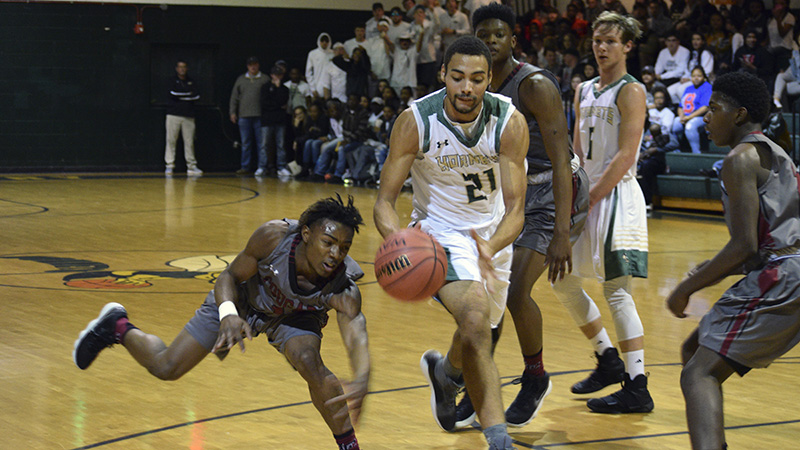 POPLARVILLE —Lawrence County held Poplarville to only two points in the third quarter and pulled away to a 57-29 victory to remain undefeated in Region 7-4A.

After one quarter of play, the Hornets trailed 10-7, with Canaan Ray and Jacob Landry scoring three points each and one point from Dante Buckley. The Cougars began the second quarter with an 8-0 run and extended the lead to double-digits.

Ray scored the first two points of the quarter for the Hornets off a jump shot and added another point seconds later off a successful free throw.

After a basket from Lawrence County’s Reggie Statham, Landry drove down the court but was fouled on his way to the basket and he was able to sink one of two free throws and cut the Hornet’s deficit to only nine points at 20-11.

During the last two minutes of the second quarter, the Cougars outscored Poplarville 9-2 and held a 29-13 lead by halftime.

In the third quarter, Lawrence County scored 15 points and held the Hornets to only two points. Dante Buckley scored the lone two-pointer for Poplarville in the quarter.

During the last quarter of the game, Jordan Bolton and Taylor Josey scored four points each for the Hornets, Ray had three, Trent Chadwick had two and Buckley added one.

“Our district is well-matched, with a lot of the games being close score-wise. I think in the district tournament, anything can happen. Lawrence County is the clear favorite and it’s going to be tough to beat them,” Poplarville boys Head Basketball Coach Run Bowen said. “But after them, anyone can beat anyone on any given night. We have had two games when we played well earlier in the season and I hope to get back on the right track before the beginning of the district tournament.”

The Lady Cougars held a 17-2 advantage after one quarter of play and by the end of the second quarter, the team led 33-8.

The Lady Hornets (5-14, 1-7 Region 7-4A) were able to find an offensive groove in the second half by scoring 12 points in the third quarter and 14 in the fourth.

Both the boys and girls teams will play the last district game of the season Friday night at home against Forrest County Agricultural. The girls game will begin at 6 p.m., followed by the boys at 7:30 p.m.

— In other action around the county, Picayune girls basketball team lost 34-24 against district-rival North Pike High School Friday night. The Lady Maroon Tide finished the season with a 1-5 Region 7-5A record and will enter the district tournament as the number 4 seed.

Meanwhile, in a game that came down to the wire, the Picayune boys basketball team lost 41-40 against North Pike. In the first quarter, the Maroon Tide led 10-5 but the Jaguars cut the deficit to only one-point, 21-20. By the end of the third, North Pike took a 33-29 lead and even though Picayune outscored North Pike 11-8 in the last quarter, the team still fell one-point short of a victory. The Maroon Tide finished district play with a 3-3 Region 7-5A record. The boys and the girls teams will finish the regular season Friday night when they host Hancock County High School.

AJ Banks led the Blue Devils with a 36-point performance, Willie Reece had 16 and Jason Long finished with 14.

Also, Ethan Henley had five, Caden Thompson and Jonathan Jenkins scored three points each and Josh Theady added two. With the win, the Blue Devils won its 16th game of the season and hold a 3-2 Region 7-5A record.

Meanwhile, the Lady Devils fell 47-40 against the Lady Tigers.

By halftime, Hattiesburg held a 25-20 lead but by the end of the third quarter, the Lady Devils managed to gain a 35-33 lead. During the last quarter of the game, the Lady Tigers outscored PRC 9-5. With the loss, the Lady Devils fell to a 1-4 Region 7-5A record.

Both the boys and girls team will finish the regular season at home Friday against North Pike. The girls game will tip-off at 6 p.m., followed by the boys at 7:30 p.m.