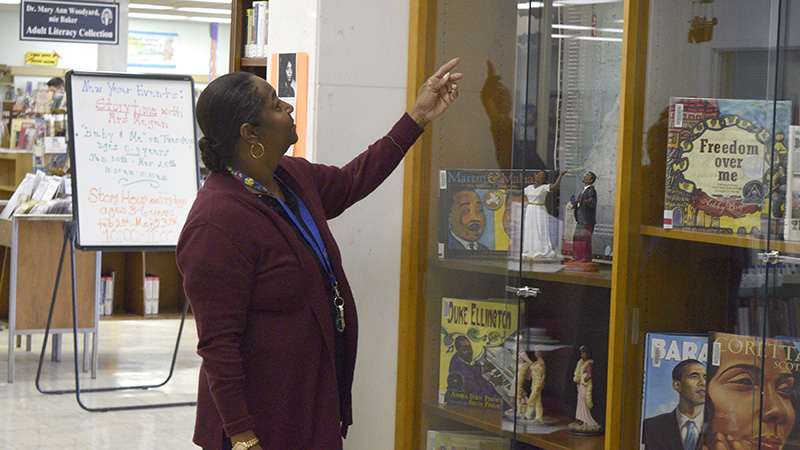 Temecia Ellis shares information on how the Blues type of music came to life in the state of Mississippi. The Black History Month display at the library features children’s book, figurines and handmade quilts. Photo by Victor Tun

The display is broken down into different sections with different themes. It includes books about how ancestors of African-Americans made their way from Africa to the United States, such as “Shadow” by Blaise Cendrars, “Sosu’s Call” by Meshack Asare and “The People Could Fly” by Virginia Hamilton.

The display also includes figurines and a map that illustrates African-American musicians who were born in Mississippi.

“While Mississippi is known as the birth state of the Blues, we also decided to incorporate jazz music into our display, because a lot of great jazz players have come from Mississippi,” Ellis said.

In the middle of the display is a copy of the Emancipation Proclamation, which was signed in 1863 by former President Abraham Lincoln. The document freed all slaves from their owners, Ellis said. Books in this section of the display describe what African-Americans endured during the time of slavery and the Civil War.

One shelf below, books that tell the history of notable African-Americans such as former U.S. President Barack Obama and civil rights leader Dr. Martin Luther King, Jr. are on display.

Also on display is the book, My Story My Song, which tells the story of Pass Christian native and current Good Morning American host Robin Roberts and her mother, Lucimarian.  The display also features a short story written by Dr. Selika Sweet, who is currently the Women Veterans Director at Jackson Veterans Association, can also be seen at the display, Ellis said.

A handmade quilt by Dixie Whitehead of Carriere is also proudly featured in the display.

Ellis said during the time of slavery, quilt patterns helped slaves find their way north in search of freedom via the Underground Railroad.

Renee Buford, the Head of Circulation at Margaret Reed Crosby Memorial Library, donated the figurines featured in the display. All books that are part of the display are available for checkout at the library, Ellis said.

“We are very proud of the display and Mrs. Ellis and everyone that helped put this display together did a great job,” Pearl River County Library System Director Carol Phares said.

The display is located near the front desk in the library. For more information, contact library staff at (601) 798-5081.

“We want everybody in the community to come see our display and books that we have available at the library,” Ellis said. “Our focus is to be able to teach children about the history and the meaning behind Black History Month.”