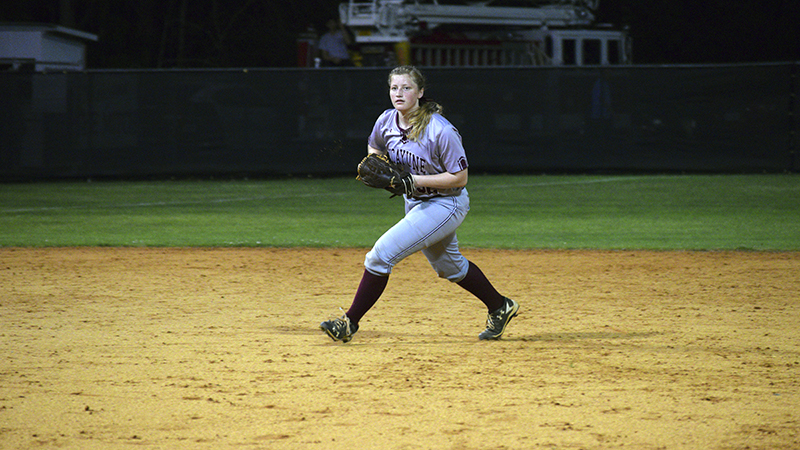 The fifth inning began with the Lady Hurricanes’ (2-0) Sarah Cuevas being walked to first base.

The next batter, Braxon DeWitt, bunted the ball but a mishandled catch by Kammy Chaisson at first base allowed Cuevas the opportunity to score all the way from first, giving the Lady Hurricanes a 6-4 lead.

On the next play, DeWitt stole third after a wild pitch from Picayune’s (0-1) Devin Frierson. After a single from Brooke Turan, Abbey Fontan replaced Turan as a pinch runner and West Harrison had runners on third and first base with only one out. Frierson later walked Bethany Stiglet and the bases were loaded with Lady Hurricanes. Marley Sims then hit the ball into center field, which allowed DeWitt and Fontan to score and even though the Lady Tide were able to tag out Stiglet, Sims scored on an inside-the-park home run, which gave the Lady Hurricanes a 9-4 lead. West Harrison’s Kayleigh Necaise and Sydney-Brooke Sims were able to hit singles in their next two at-bats, but the inning came to an end after Layne Turan was tagged out at first base.

The next two and a half innings remained scoreless for both teams, which brought the game to an end.

“I thought my team played hard and even though we’re young on some spots, we are also talented on other spots. We’re just inexperienced,” Lady Tide Head Coach Kristi Mitchell said. “We’re going to use this first season, first couple of games of the year, to grow and develop the talent that we have around us.”

During the first two innings of the game, Sims scored twice and Turan and Cuevas also scored to give West Harrison an early 4-0 lead.

The bottom of the second inning began with Picayune’s Rianna McNeely reaching first base after hitting a single into left field. Sarah Walker and Cameron Carter were walked during their first at-bats, which loaded the bases for the Lady Tide with one out.

The next batter, Millie Stewart, hit the ball into center field and even though Carter was tagged out at second, McNeely was able to score the first run of the game for Picayune. On the next play, Jessica Magee hit a double, allowing Walker to score and cut the team’s deficit to only two runs. The Lady Tide tied the game after Sarah Stockstill bunted the ball and Stewart and Magee scored from third and second base, respectively.

The inning came to an end for Picayune after Frierson was tagged out while trying to reach first base. In the third inning, a mishandled catch by Carter at first base allowed Turan to score again for the Lady Hurricanes and give the team a temporary 5-4 lead.

For Picayune, Stockstill went 2-for-4 with two RBIs, Chaisson and Stewart also batted 2-for-4, with Stewart adding an RBI and Magee was 2-for-3 with an RBI.

“We’re going to build from what we saw tonight and this team is only going to get better as they play,” Mitchell said. “I thought we did some really good things such as hitting the ball hard at times but we just didn’t put enough of our hits together. We made some mistakes that we can fix and I thought Frierson did a great job of coming in and pitching the last five innings of the game.”

The Lady Tide will play its next game against Hancock County at the PRCC Classic at Pearl River Community College on Saturday at 9:30 a.m.