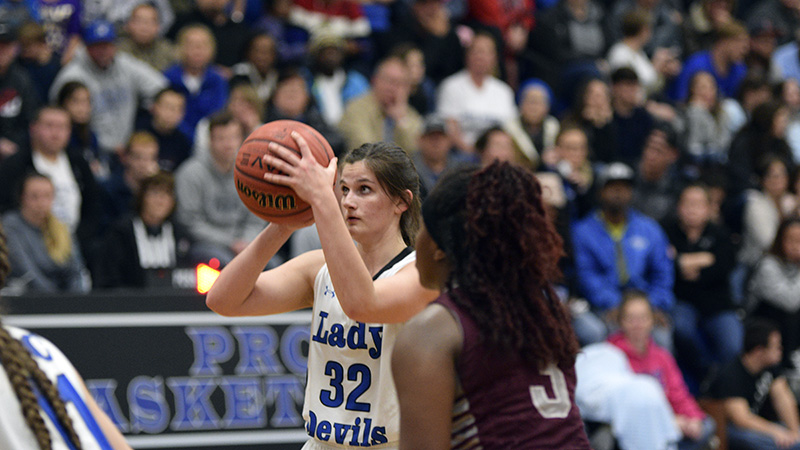 On to the playoffs: Lakyn Spence scored 10 points for the Lady Devils in the team’s victory over county-rival Picayune Thursday night. Photo by Victor Tun

In a win-or-go-home matchup, the Lady Blue Devils defeated the Lady Maroon Tide 34-24 during Thursday night’s third-place game, advancing the team to the Class 5A state playoffs.

Early in the fourth quarter, Picayune led 21-20 but a four-point play by Lakyn Spence started a 9-0 run by Pearl River Central and helped the team put the game away.

“At the time, we were struggling offensively and the play by Spence gave us the boost we needed to win the game,” Head Coach Tony LaBella said.

Spence finished the game with 10 points for the Lady Devils, Harlee Davis had six and Payton Lee and Brooklyn Howe scored five each.

The game began with PRC holding a 5-3 lead after the first quarter and in the second quarter, neither team was able to pull too far away from each other but the Lady Devils held a 12-10 lead.

By the end of the third quarter of the game, PRC led by one-point with a 20-19 score.

With the win, the Lady Devils (16-12) clinched the number three seed of Region 7-5A heading into the state playoffs and will play on the road Monday night during the first-round matchup. PRC will face the losing team of the Brookhaven and Wingfield matchup that took place Friday night.

“We were all a little frustrated because we had lost seven out of our last eight games, even though we led either at halftime or by the beginning of the fourth quarter,” LaBella said. “Last night, we executed well on defense and we had the big plays we needed on offense in order to win the game.”

— Maroon Tide 59, Jaguars 51: After North Pike tied the game at 41 points with less than a second remaining in regulation, Picayune needed two overtimes to keep the season alive and defeat the Jaguars 59-51 in Thursday night’s third-place matchup in Hattiesburg.

At the end of regulation, North Pike’s Elijah Martin shot the ball from mid-court in an attempt to tie the game and even though the shot fell short of the basket, a foul was called and Martin headed to the free throw line for three free shots and a chance to tie the game.

At the line, Martin sank all-three free throws and sent the game into overtime. In the first overtime of the game, North Pike led by two-points with just over 30 seconds remaining, until Delrae Smith headed to the line after being fouled and tied the game at 45 points, which forced the game to a second overtime.

In the second overtime of the game, Picayune outscored the Jaguars 14-6 and clinched the number three seed in Region 7-5A heading into the Class 5A state playoffs, which will begin next week.

Picayune (19-10) will face the loser between the Forrest Hill and Wingfield matchup, which took place Friday night.

PRC’s softball team is ready for a new year