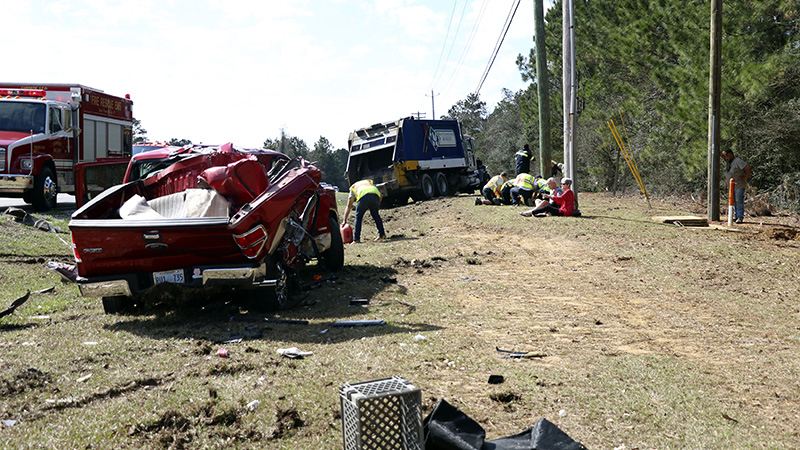 MESSY SCENE: Crumpled vehicles lined the side of Highway 11 Monday morning after this two vehicle accident involving a Ford F-150 and a large garbage truck. Three occupants of the garbage truck were transported to Highland Community Hospital for treatment of minor injuries. No fatalities were reported. Photo by Jeremy Pittari

Monday morning just after 10:40 an accident occurred along Highway 11 near the entrance of Apple South that involved a Ford F-150 and a large garbage truck, resulting in several injuries but no fatalities.

James Belle of Carriere, said he was northbound on the highway in his F-150 when he slowed for traffic before turning into Apple South. When he slowed to make the turn, he saw a white truck with the words “meter reader” written in large red letters across its side approaching from behind. When he realized the vehicle behind him was approaching at a high rate of speed, he decided to quickly make his turn across the southbound lane to try to avoid an accident. However, a garbage truck in the southbound lane could not react to his evasive maneuver in time, and the two vehicles collided.

“I was either going to get hit from the back or the front,” Belle said.

Belle suffered several minor injuries but said that he was okay.

Regardless, he planned to visit the hospital after the wreck was cleared. Three crewmen were in the cab of the garbage truck at the time of the accident, said Carriere Volunteer Fire Department Chief Chris Banks, all of whom reported neck, back and leg pain.

Banks said everyone involved in the accident had already exited their vehicles when he and other emergency responders arrived at the scene. Luckily, they were on dispatch at the nearby Health Department so they were able to respond quickly.