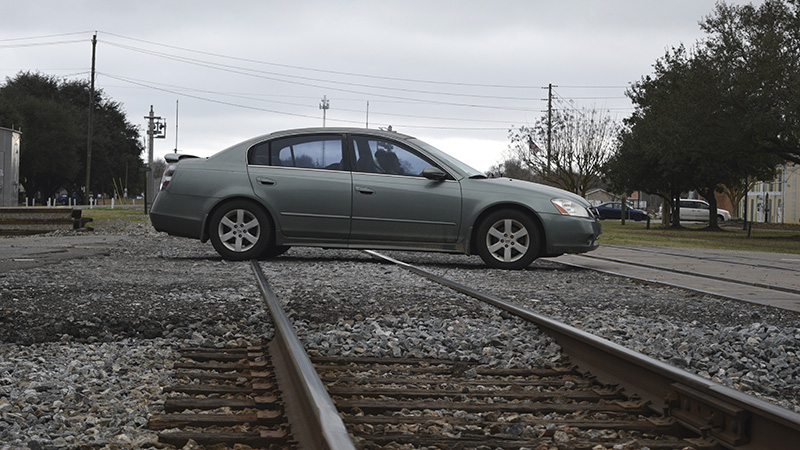 Norfolk Southern Director Public Relations Susan Terpay said the company plans to finish the current maintenance project on Goodyear Boulevard by the next of next week. Photo by Victor Tun

Public Works Director Eric Morris said the city of Picayune has received numerous complaints, either through social media or telephone calls, about the unfinished project in the last couple of days.

“I want everyone to know that the city is aware of the situation but at the same time, we are not responsible for the ongoing project,” Morris said. “Norfolk Southern is responsible for the project and we are doing our best to get in contact with them, in order to find out when they will complete the current project.”

Morris said the project began before the end of the year. But without notice, the crew left after the beginning of the new year in order to go work somewhere else and haven’t been back since.

The complaints led City Manager Jim Luke to request a video and message be posted on the city’s Facebook account on Feb. 14, which said, “City Hall has received several complaints about the Goodyear Boulevard railroad crossing. This crossing has been under construction for several weeks. Railroad and rail crossings are NOT the property of the city of Picayune, nor are they maintained by the city. They are the property of Norfolk Southern. However, I have been in contact with representatives from Norfolk Southern about this Crossing and they have indicated to me that the necessary work crew will be here soon to finish the repairs. We understand the inconvenience these things cause and we appreciate your patience in navigating through this area. Please take precaution when traveling over this crossing.”

Norfolk Southern Director Public Relations Susan Terpay said in an emailed statement that the company plans to finish the railroad-crossing project by the end of next week.

“The work is part of our regular track maintenance program,” Terpay said through an email. “More shippers are moving their goods by rail and the increase in rail traffic has slowed some of our track maintenance (such as at railroad crossings.) In order to do track work, we need blocks of time when trains are not operating on that stretch of track.”

On Feb. 15, another post on the city’s social media account thanked Norfolk Southern for putting down asphalt as a temporary fix until the project is complete.