Blue Devils set to face Hattiesburg for the district championship 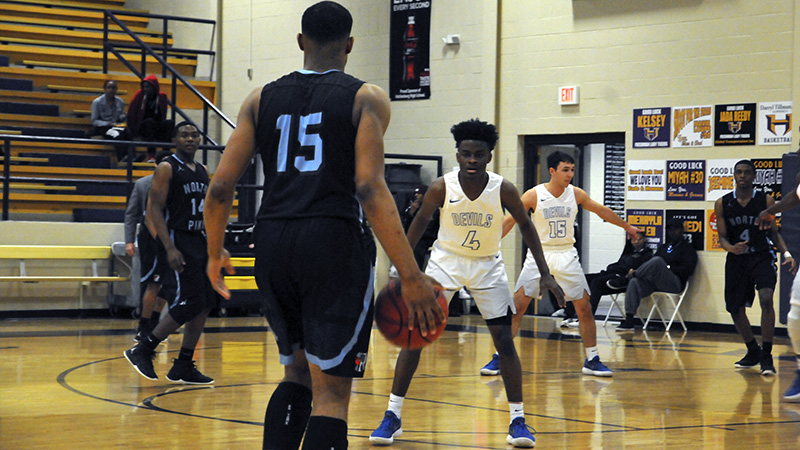 Championship game: AJ Banks (4), who is averaging 21.1 points per game this season, is the team’s leading scorer. PRC will face Hattiesburg Friday night at 7:30 p.m. for the district championship. Photo by Victor Tun

The Blue Devils will play Hattiesburg for a third time this season in tonight’s Region 7-5A championship game.

In the first round of the district tournament Tuesday night, Pearl River Central defeated North Pike 51-47 and the Tigers defeated Picayune 56-43.

During the regular season, PRC and Hattiesburg faced against each other in a home-and-away series of which the Blue Devils came out victorious.

The first matchup took place on Jan. 19, where PRC was able to pull away late in the fourth quarter and secure a 59-55 victory. Two weeks later, the Blue Devils made its way up to Hattiesburg, and just like the first time, the team won 79-70 in a game that came down to the wire.

“It’ll definitely be a challenge because they’re well coached, very athletic, they shoot the ball well and their rebounding is what sets them apart from other teams,” Head Coach Scott Stephens said when asked about facing Hattiesburg for a third time this season. “We are going to have to be on our best, we are going to have to do a lot of things right in order to win Friday.”

PRC is also led by seniors AJ Banks and Jason Long and juniors Willie Reece and Ethan Henley. Currently, Banks is the team’s leading scorer, averaging 21.1 points per game, followed by Willie Reece with an average of 13.2 points and Jason Long with 9.5 points on average.

“They do their job, they work hard and they do what we tell them to do and have bought into what we’re trying to accomplish this year,” Stephens said when asked about this season’s performance from Banks, Long and Reece. “They have worked hard all year and that’s a big reason why we’re 19-6 and making history in Carriere. Without those guys, none of this would be possible.”