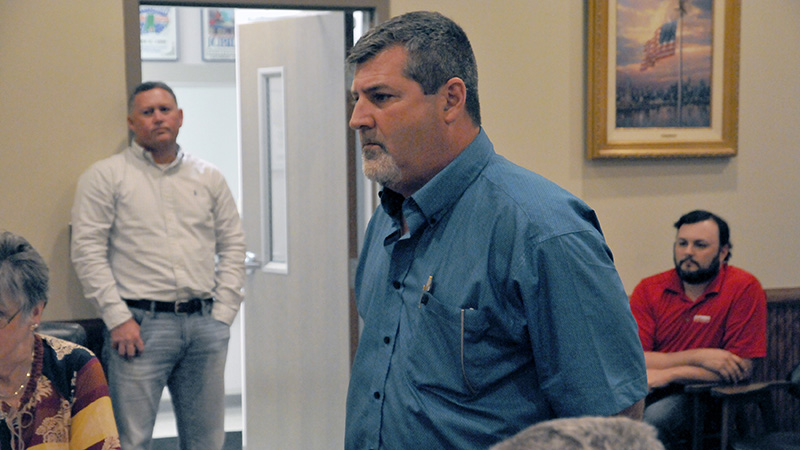 WIRELESS READING: Kurt Ash, who was representing Master Meter Inc., spoke to the Poplarville Board of Aldermen about the need to update the city’s water meters to not only save on water usage, but employee time. Photo by Leah McEwen

The Poplarville Board of Alderman meeting Tuesday night began with a presentation about water meters by Master Meter Inc. representative Kurt Ash. Ash said meters from Master Meter Inc. incorporate a special radio system, which allows meter readers to track water usage without having to exit their vehicles. This, Ash said, would allow the city to cut down on manpower. The meters’ batteries can last between 15 and 20 years and with wiring on the inside of the register instead of on the outside, the meters can survive moist, underground environments for longer periods of time. They are also designed with security systems to discourage tampering and can track water usage for up to 160 days down to the hour for increased precision.

Alderwoman Shirley Wiltshire said that because so many of the city’s meters are outdated, citizens may be severely underpaying for water usage. While the installation fee and associated yearly maintenance costs may be high, Ash said that an updated meter system would quickly pay for itself. As an example, it was reported at the meeting that there was a 39 percent annual water loss in 2017. If the Board decides to move forward, the city would need to update approximately 1,300 water meters.

Adam Schraeder and Joey Jarrell, representatives from Mississippi Power Company, discussed the possibility of installing LED lights in an effort to replace older lights throughout the city. Since the city pays the power company for the lights, rather than energy usage, the city’s monthly expense would not significantly change. However, Schraeder said newer lights would provide more consistent light and better quality. Schraeder said it would take more than a year to change all of the lights in the city, so he recommended replacing them in sections.

In regard to development of the new town green, questions were raised about lighting costs and security measures. Schraeder and Jarrell said that they would ask vendors to determine how many lights are recommended based on the development plans and would return with an estimate.

An update was provided on the repairs to the Raine Street Community Center during Tuesday’s meeting. Donors gave wood, tin and decking to renovate the center. Volunteer workers replaced all of the tin on the roof and about half of the decking. Since the roof has been fixed, the only repairs left are to the electrical system. The Board was asked to waive the $100 fee associated with acquiring building and electrical permits. Because the community center is considered a non-profit, the Board approved the motion.