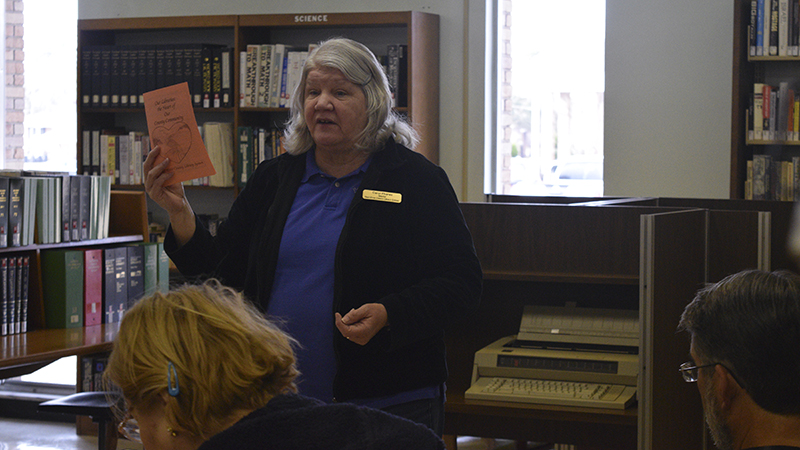 Pearl River County Library System Director Carol Phares talked about the services the public libraries in Pearl River County offers to the community. In the last 10 years, the budget for the libraries has been cut to almost 50 percent. Photo by Victor Tun

Phares said the Margaret Reed Crosby Memorial Library and Poplarville Public Library are able to keep the doors open in part due to funding from the Pearl River County Board of Supervisors, the Program Improvement Grant, the federal government and the cities of Poplarville and Picayune. But during the last two fiscal years, the budget for the library has been reduced to about half of what it used to be 10 years ago.

Due to the decrease in funding, the library relies on fundraisers conducted by Friends of the Library and donations from the public in order to acquire new books. One of the fundraisers is the Friends of the Margaret Reed Crosby Library annual book sale, which will take place later in May. Through those funds, the library is able to acquire new books and offer its services to the community.

“Libraries are a place where we help educate the community and provide services that will benefit our youth,” Phares said.

“There are people who are able to purchase a book online but not everyone can afford to do so. And for them, the library is their only source and opportunity and all they need is a library card.”

Margaret Reed Crosby Memorial Library employee Megan Miller said that recently a local couple was able to attend an online school and further their education in part due to the free Internet the library offers.

“By visiting the library, people in the community can learn how to use a computer and also apply for jobs or create a resume, because even though it is implied that everyone has a computer and Internet at home, that’s not always the case,” Phares said.

During the meeting, Phares expressed how she hopes a group of community members will be able to represent the library at the local and state level in an effort to curb further cuts to the budget in years to come.

“Libraries are the last bastion of free thought,” Phares said. “I hope this is the beginning of an effort that will not only involve people in Pearl River County, but also all throughout southern Mississippi.”

Phares will attend the 2018 session of the Mississippi Legislature in Jackson on Feb. 21, and talk to government officials about the importance of funding public libraries. Anyone interested in learning more about public library funding or who wishes to accompanying Phares to Jackson can call (601) 798-5081 ext. 111.