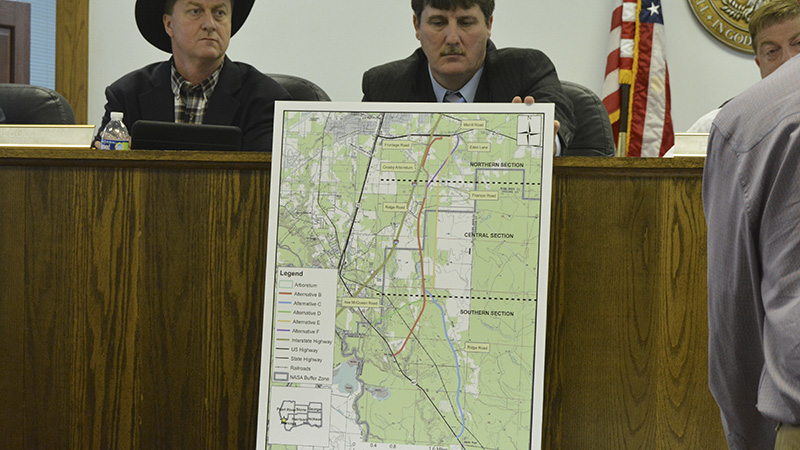 IMPROVEMENT PLAN: During Monday’s meeting, the Pearl River County Board of Supervisors recapped its now postponed plan to improve Ridge Road. The project is shelved until funding is found, or a large company expresses interest in locating to that area. Photo by Mrudvi Bakshi

Monday morning, members of the Pearl River County Board of Supervisors discussed the current status concerning improvements to Ridge Road, and also cleared up a public misconception about the gated section of the road, which as far as the Board is concerned, is private.

Board President Sandy Kane Smith said the discussion was for informational purposes only, so no action was taken on the matters.

The discussion began with a bit of history about the plan to improve Ridge Road. The plan began in 2005 and involves relocating the north and south ends that connect with Mississippi 43 South and Highway 607 respectively. County Engineer Les Dungan said the project was formed to address traffic concerns along the road and the fact that the Picayune Municipal Airport needs better access for economic development purposes.

“The beginning of the project was born out of the idea that there was a problem with traffic in that area, safety and access to the airport in particular,” Dungan said. “The airport was viewed and is still viewed as having great potential for economic development in Pearl River County.”

Federal funding was secured back in 2006 with help from then Representative Gene Taylor to conduct environmental studies and for planning and design of the project, totaling $1 million, County Administrator Adrain Lumpkin said. That money has since been spent and those documents are still on file. Lumpkin said the plans are good for about another 10 years, and if any changes are needed, such as dealing with wildlife conservation, they can be addressed with simple updates instead of starting the process over.

“The work has been completed for some time now prior to the current Board taking over, and we now need additional funding in order to advance the project,” Dungan said.

However, with a total cost of nearly $27 million to build the entire project, Lumpkin said the project has been put on the back burner until an economic development need or funding are found. That amount includes about $1.5 million in right of way acquisition that would require 81 parcels of land totaling 100 acres to be purchased, wetland mitigation totaling $1.6 million and $1 million to relocate utilities.

If the project were to move forward, it could be built in sections as funding became available. But, Lumpkin said that in order for the project to gain momentum again a large business would need to express interest in locating along Ridge Road. He said that’s still possible since Ridge Road is located so close to Stennis Space Center.

“I’m not going to say it’s wasted money,” Lumpkin said about the funds used to begin the project.

Monday’s meeting also addressed public concerns expressed by Frank Egger, Richard Crawford and Jeff Smith about a section of Ridge Road that is gated off. Previous coverage states these individuals contend that the section of road in question should be considered public, and as such the gate removed. Other arguments posed by Egger state that if the county were to move forward with the Ridge Road project, it should utilize the gated portion of the road since it connects with Texas Flat Road near Highway 607. But Supervisors disagree.

“Just because some folks do not like our answer does not mean we are not doing the right thing, our job is serve the masses and not to try and do things to just satisfy them,” Holliday said.

Lumpkin said that according to the Pearl River County Board of Supervisors, the gated section of the road is private.