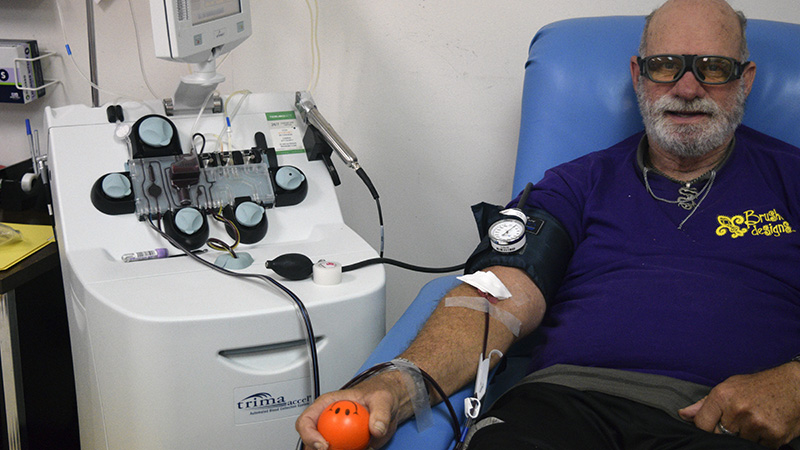 Nathan Bonnin donates blood at the Blood Center in Picayune. The Blood Center will relocate to a new location starting next week at 701 Highway 11. Photo by Victor Tun

Pearl River County, like much of the rest of the nation, is currently experiencing a shortage of blood donations.

This trend appears to occur annually, which lead President Richard Nixon to declare January as National Blood Donor Month in 1970.

That’s because after the end of the year holidays, the need for blood increases but the number of donors decreases. In order to raise awareness of the need to donate blood during this time of year, President Nixon named January as National Blood Donor Month, Blood Center Public Relations Manager Paul Adams said.

During the winter, especially in the northern part of the country, people are less likely to be able to drive to a donation center because of the dangerous driving conditions. Even if a lull in donations occurs over the course of just two or three days, it has a major impact on hospitals that rely on blood centers to provide the blood they need to help patients.

According to a press release from The Blood Center, current collection levels are below average, so anyone who is able to donate blood should do so. The release suggests bringing a family member or friend to donate as well.

Only about three percent of the population donates blood on average, Adams said. Additionally, the recent rash of flu cases in the area has further reduced the number of donations, he said.

Donating blood provides benefits to the donor as well, such as being able to receive blood pressure readings and find out about their current cholesterol level.

One donation can potentially help three individuals, since the blood is separated into red cells, platelets and plasma.

Residents in Pearl River County can currently donate at the local Blood Center, located at 318 Memorial Boulevard in Picayune. However, starting next week The Blood Center will relocate to 701 Highway 11.

Anyone over the age of 17 is eligible to donate. The process takes less than an hour and a person can donate every 56 days. For more information on The Blood Center and the requirements and benefits of donating blood, visit thebloodcenter.org.

“We take care of 30 area hospitals and our focus is to help every patient and hospital as much as possible. Every donation goes a long way,” Adams said.