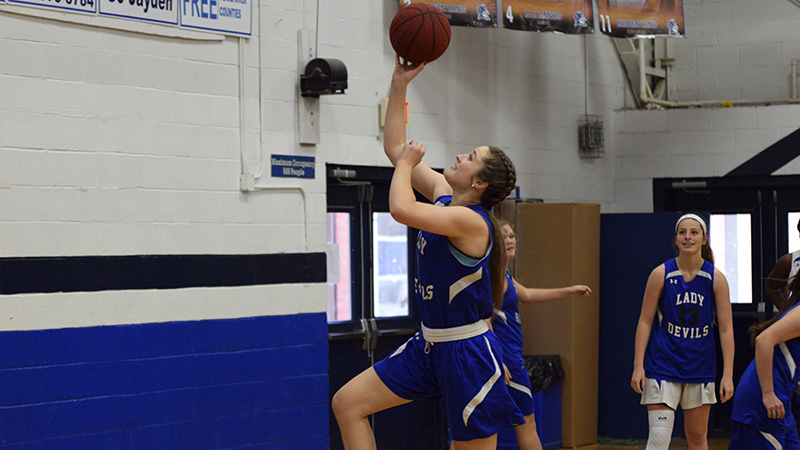 LEAVING EVERYTHING ON THE COURT: Senior Brooklyn Howe and the Lady Blue Devils hope to reach the state playoffs for the first time since the 2014-2015 season. Photo by Victor Tun

The 2017-2018 basketball season for the Lady Blue Devils is in-full-gear and fifth year head coach Tony LaBella hopes to lead the team to its best season yet.

Pearl River Central began this season with a 53-33 victory over Gautier High School, but lost its next two matchups against D’Irberville High School and Ocean Springs High School.

After those two defeats, the Lady Blue Devils have won five games in a row, including a 42-40 victory on the road against Stone High School.

“That was a big win for us and I think the kids are more confident after that win,” LaBella said. “In that game, we made the game winning shot with 15 seconds remaining. We also played Stone without our two leading scorers and now we understood that we don’t have to rely on two people to lead us to victory. Our biggest takeaway of the season so far is that everyone can contribute and we have a good enough rotation to be able to win games and be successful.”

Last year, PRC got off to a hot start with a 7-2 record but finished the season with a 15-14 record. The team suffered a huge setback when senior Kayla Ryan sustained a season-ending ACL injury.

“Ryan was a four-year player and her injury had a big affect on us because we only had two seniors on the team and we didn’t have enough depth for someone to come off the bench and do the things she used to do,” LaBella said.

“This is the most seniors I have had in a team during my five years here,” LaBella said. “All of them have played at least three years. Attitude wise, they’re a really easy team to coach. They are a good group of seniors, they know what the expectations of the program are and they’re always helping the younger players every day.”

Despite starting the season with a good record, LaBella and the Lady Blue Devils believe they have not yet reached their full potential.v

“I think we can play much better than we have and we’re also not consistent enough at the moment,” Gower said. “This year, we have been scrimmaging a lot more and that has helped us become a much faster team compared to last year. Once we become more consistent with our style of play, we’ll be in a position to be a much better team.”

Seniors Kyle and Howe hope to end their high school basketball career on a high note, a sport they started playing together.

“I started to play basketball because Howe told me how fun it was and I had never played before and so far it has been a great experience,” Kyle said.

The Lady Blue Devils will begin region play in early January but will play five games in December and participate in the Vancleave basketball tournament, which will take place two days after Christmas.

“I think our record and effort has been good but we haven’t gotten into the rhythm we had over the summer,” LaBella said. “Everyone is unselfish and plays great defense and they always put the team ahead of themselves, whether that is in practice or in a game.”

“Spence has been with the program for four years, she’s a great leader and has improved a lot from last year,” LaBella said. “My assistants Kelsey Carroll and Mercy Baucum, who played on last year’s team, have done a great job developing players on the JV team and I’m looking forward to a great rest of the season.”