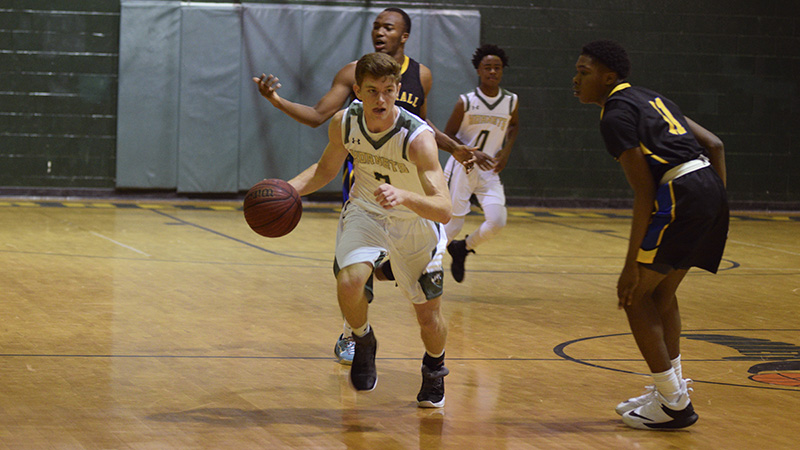 Canaan Ray led the Hornets with 27 points but the team came up short of a last minute victory against Sumrall High School. Photo by Victor Tun.

POPLARVILLE — Even though the Poplarville boys basketball team rallied from a 13-point deficit to tie the game late in the fourth quarter and send it into overtime, the Hornets fell 63-57 against Sumrall Tuesday night.

“Earlier I talked about the character of the kids at Poplarville being one of the reasons I wanted to coach here and tonight, they showed that character as they kept fighting until the end,” Poplarville Head Coach Run Bowen said. “We’re young and we’re making young mistakes but we’re cutting down on our turnovers, we’re executing better and if we keep doing that, we have a great opportunity to win ball games down the road.”

Trailing 29-16 at the beginning of the third quarter, the Hornets (1-3, 0-1 Region 7-4A) began the second half with an 11-2 scoring run after Josey, Chislom and Ray hit a three-pointer each and Landry added a layup, cutting Sumrall’s lead to only four points.

Halfway through the third quarter, Hart made a free throw for the Hornets after a foul, but five-straight points from the Bobcats (6-3, 1-0 Region 7-4A) helped them extend their lead 38-28.

Before the end of the third quarter, Josey added four points and Ray added two to help the Hornets cut its deficit to five, trailing 39-34.

A minute into the fourth quarter, Josey shot a three-pointer to shorten Sumrall’s lead to a one-possession game.

Both teams traded baskets in their next two possessions before Sumrall extended its lead 48-39 after completing two-layups and three free throws.

Three minutes of a lack of activity on the scoreboard ended when Ray scored off a two-point jumper for the Hornets but Bobcats’ Matthew Cronin capitalized with a jump shot of his own to extend his team’s lead 50-41 with two minutes left in the fourth quarter.

With just over a minute left in the game, a three-pointer from Ray and Josey and a dunk from Landry helped the Hornets cut Sumrall’s lead to three points with fifteen seconds left on the clock. On the next play, Ray stole the ball from Sumrall and sunk a three-pointer, tying the game at 52.

In overtime, the Hornets were unable to build off their momentum from the third and fourth quarters, eventually being outscored 11-5 and giving Sumrall its first region win of the season.

“This is a young team and we’re learning as we go and I still believe if we keep working hard every day, we’ll have a good chance to finish in the top four of our district,” Bowen said.

Sumrall led 15-10 after the first quarter and jumped to a 13-point lead by the end of the first half after they outscored the Hornets 14-6 in the second quarter.

The Hornets will travel to Carriere Friday night to take on Pearl River Central High School.

Poplarville’s girls’ basketball team lost 47-38 Tuesday night in its district opener. The Lady Hornets (1-5, 0-1 Region 7-4A) trailed Sumrall 26-16 at halftime and even though they outscored the Lady Bobcats 22-21 in the second half, they came up short of the win. Jasmine Merrill led the Lady Hornets with 17 points, Tytiana Buckley had 13, Zakia Jordan added four and Jayme Sones and Nashanti Tillman had two points each.