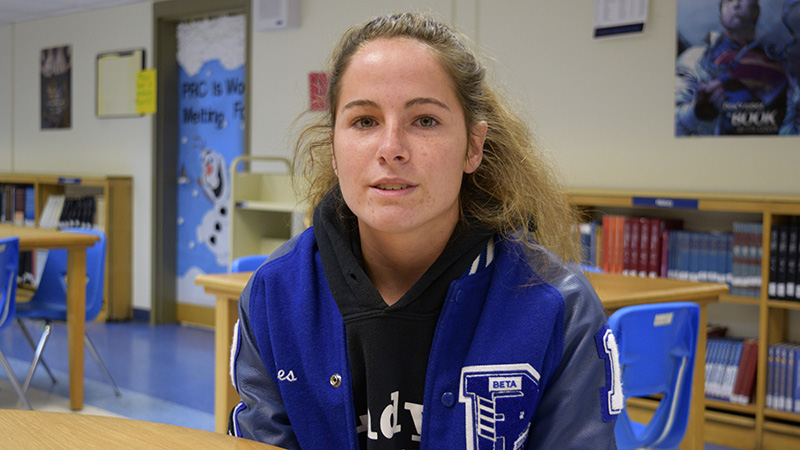 MAKING EVERY DAY COUNT: Senior Mercedes Babin has seen major improvement from everyone on her team and hopes to reach the state playoffs by the end of the regular season. Photo by Victor Tun.

So far this season, games have not gone in favor of the Lady Devils, who are still seeking their first victory.

“Five of our starters are out due to injuries and that has been a huge setback for us this year,” Weems said. “Win or lose, they’re heading towards the right direction and I expect the future to be bright for this team.”

This season, the girls have a team that consists of 16 underclassmen and four seniors. The seniors on this year’s team are Alahna Lee, Harlie Miley, Samantha Langlois and Mercedes Babin.

“The girls have made a significant amount of progress throughout the season,” assistant coach John Trahan said. “They still have a long way to go but they’re reaching new heights every day.”

In the past, the Lady Devils won district championships, but in the last couple of years the team has not been able to win any championships or compete in the state playoffs.

Weems hopes to increase the success of the program in the upcoming years.

With many underclassmen earning a lot of playing time this year, one player to watch out for in the future is sophomore Jade Shaw.

“She has improved a lot over the course of the season and I expect great things out of her in the future, just like I do out of everyone else,” Weems said.

Tuesday, the Lady Devils fell 3-0 in their first district matchup of the season against Hattiesburg. During the next five weeks, the team will face district opponents Picayune Memorial High Schoool, North Pike High School and a rematch with Hattiesburg High School.

Even though the Lady Devils have a losing record so far, Babin and the team believe they can still end the season on a positive note.

“We have had so many rocky roads and it would have been easy for us to give up but we just keep fighting,” Babin said. “Even though the scoreboard doesn’t say we’re winning, I believe we are because every time we step off the field we’re improving as a team and we’re learning what we need to do to win games. We can still reach the state playoffs but we just have to figure out how to score goals.”