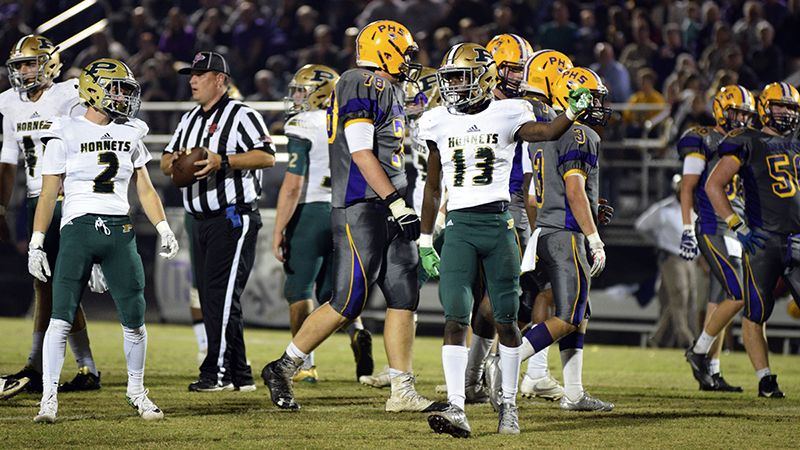 DEFENSE WINS CHAMPIONSHIPS: Early in the second half, D.J. Travis caught an interception for the Hornets that proved to be turning point in the game. Travis and the Hornets will host East Central High School next week in the South State Championship game. Photo by Victor Tun

For the second year in a row, Poplarville will play in the South State Championship after the Hornets scored 26 points in the second half of Friday’s game and earned a hard-fought 33-12 victory over Purvis.

The Tornadoes received the ball in the beginning of the second half and could have tied the game, but an interception by D.J. Travis gave the Hornets the momentum it needed to come out on top.

“It wasn’t easy out there but we found a way to put some points on the scoreboard in the second half,” Poplarville Head Coach Jay Beech said. “Our defense came up with key turnovers and the interception by Travis helped us big time.”

After the interception by Travis, Cory Knight ran for a four-yard score and gave the Hornets a 13-0 lead with 8:10 remaining in the third quarter. Kicker Ethan Spiers missed the extra-point for Poplarville.

Three plays later after the Hornets scored, Purvis found themselves in the end zone after a 14-yard run by Ty Howell. Kicker Brian Bennett also missed the extra point, which  gave Poplarville an eight-point lead with 6:23 remaining in the third quarter.

Poplarville drove 80-yards down the field on its next possession to once again extend its lead. Tyson Holston finished the drive for the Hornets with a 10-yard score and Austin Bolton successfully ran into the end zone for the two-point conversion. The Hornets led 21-6 with 2:30 left in the third quarter. Afterwards, the Hornets defense stopped Purvis on a fourth-down situation on the Tornadoes’ own end of the field.

After the stop by Poplarville’s defense, the Hornets’ offense drove 61-yards down the field to extend its lead. Knight ran into the end zone for a two-yard score and gave the Hornets a 27-6 lead with 8:20 left in the fourth. Once again, Spears missed the extra-point.

On the Tornadoes’ subsequent possession, Howell threw a 25-yard touchdown pass to C.J. Bolar on the second play of the drive. Purvis attempted a two-point conversion but came up short.

With 3:24 left in the game and facing a fourth-and-goal on the one-yard line, Peytan Graham scored the last touchdown of the game for the Hornets. The score gave Poplarville a 33-12 lead.

Despite the 21-point lead by Poplarville, Purvis had an opportunity to get back into the game, but an interception by Poplarville’s Canaan Ray helped secure the win for the Hornets.

In the first half, the Tornadoes held Poplarville to only seven points.

Both offenses failed to get anything going in the first half with four of six drives ending in punts.

Just before the end of the first half, Graham scored the first touchdown of the game for Poplarville after a one-yard run. Spears successfully completed the PAT and gave the Hornets a 7-0 lead.

“I feel great, it’s my last year of high school so I have to go out with a bang,” Travis said. “Next week we’ll play at home, and we have the best stadium out there, so we’ll play hard every snap.”

Poplarville will host East Central High School in the South State Championship. The winner will move on the state championship, which will be played on Dec. 2 at Ole Miss.

Hornets faces region rival Purvis in third round of…