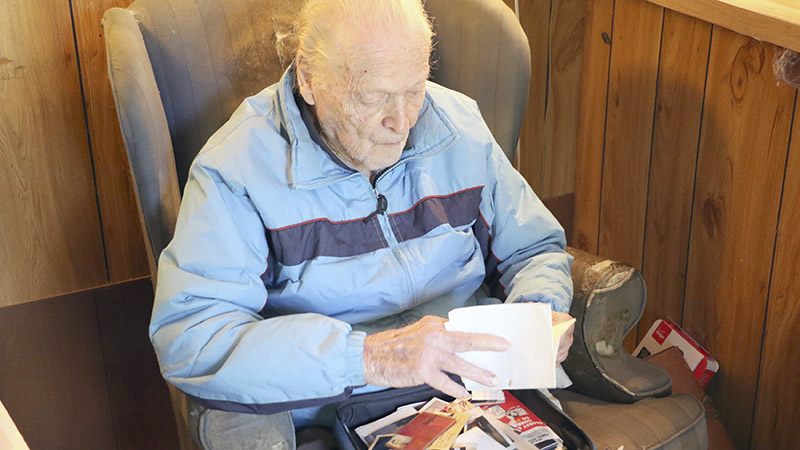 KEEPSAKES: Gilbert Pfisterer, a 91-year-old Pearl River County resident who served in the Merchant Marines during wars and armed conflicts, looks through some the belongings that remind him of days gone by. He currently lives in a mobile home in a state of disrepair, causing locals to raise funds to help him move into a Habitat for Humanity Home before Christmas. Photo by Jeremy Pittari

A bake sale will take place at Dolly’s Quick Stop in Kiln on Nov. 18, to raise funds to help a WWII veteran move into his new Habitat for Humanity home.

The funds collected in the bake sale will benefit a Nicholson man known as Mr. Gilbert.

Previous coverage states that Mr. Gilbert, whose full name is Gilbert Pfisterer, lives in a dilapidated mobile home. All the money raised during the bake sale will go toward the renovation of his new house.

“We have had several fundraisers in the last couple of weeks to help Mr. Gilbert,” Veterans of Foreign War Auxiliary post 3804 member Penny King said. “We recently held a can shake and a cake auction to collect donations from the public and we have had a good amount of success. During the two events, we collected over $1,400.”

Pfisterer, is a 91-year-old former Merchant Marine who served in three wars and two armed conflicts.

“We recently collected enough money to buy him a new television, which will end up being his Christmas present,” King said. “As of right now, several people have contacted me about helping and donating cakes for our upcoming event.”

The bake sale will take place between 11 a.m. and 3 p.m. at Dolly’s Quick Stop in Kiln.

“I invite everyone to come out and attend our bake sale to support Mr. Gilbert have a better house by Christmas,” King said.

To make a donation online, visit https://www.givegab.com/campaigns/help-mr-gilbert . With less than 40 days left in the campaign, organizers are only $500 short of their $15,000 goal.