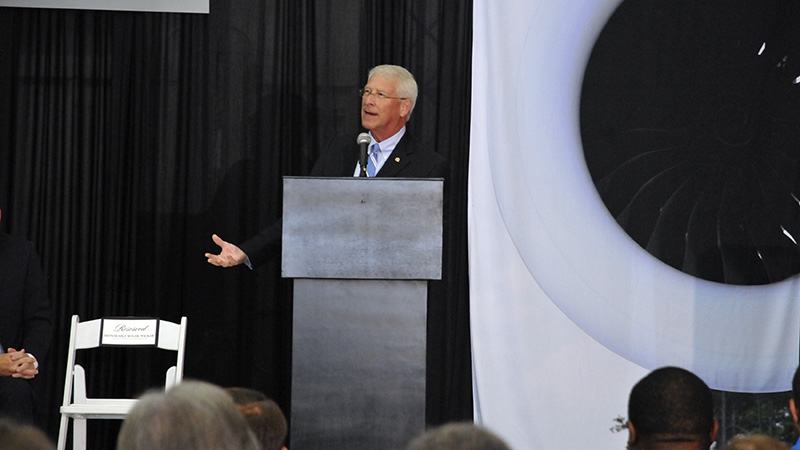 The event was attended by several company employees from across the world, including President & CEO Rolls-Royce North America Marion C. Blakey and state elected officials such as Mississippi Senator Roger Wicker.

The anniversary celebration began with Gareth Hedicker, Head of Development and Experimental Engineering Civil Aerospace Rolls-Royce plc., addressing attendees about how the testing facility has grown over the past decade.

“It feels like it was 2007 just yesterday,” Hedicker said. “Everyone here should be proud of the work they have accomplished and also how they’re bringing new technology to our engines and customers on a regular basis.”

The outdoor jet engine testing facility was the first of its kind for Rolls-Royce back when it opened in 2007.

“Some of the safest and most efficient engines that the company produces have come out of this testing facility,” CEO of Hancock County Port & Harbor Commission Bill Cork said. “Everyone here has worked millions of hours to make sure that the public flies safely and sometimes we take it for granted. I want to thank everyone here for the contributions that you have provided to our citizens in the country and around the world.”

The original investment in the testing facility was $47 million, but with the addition of a second test stand in 2013, that total rose to $90 million.

“This is a one of a kind facility and we have a highly-skilled team in it,” Blakey said. “We are a big team but we are also a big family and I want to thank everyone for bringing safety and reliability to our customers. We have a great amount of confidence in the team in this site and they have earned it throughout the years.”

“The future is bright and we want to build on this success,” Blakey said. “Ten years ago, this was just an idea and now everything has come together and it’s been a huge success.”

Wicker emphasized how Rolls-Royce believed in the state of Mississippi.

“The theme of this celebration is team and I just want to say how proud I am of everyone who works here,” Wicker said. “We have accomplished many things in the last 10 years and have also shown the desire to win and succeed. Today we celebrate 10 years of this facility but we also celebrate the next 10 years ahead of us.”

The outdoor testing facility focuses on delivering aircraft engines such as the Trent XWB, Trent 1000 and others, which power aircrafts such as the Airbus A350 and a Boeing 787 Dreamliner, according to a press release from Rolls-Royce.

“I think we have an absolute bright future ahead of us,” General Manager of the Rolls-Royce Jet Engine Testing Facility Hamish Guthrie said. “We have done an enormous job in the last 10 years but we really got an opportunity to set us up to be here for the next 20-40 years at this site. It’s all down to the drive, dedication and the capability of the team that works here and the way they work together and achieve success.”