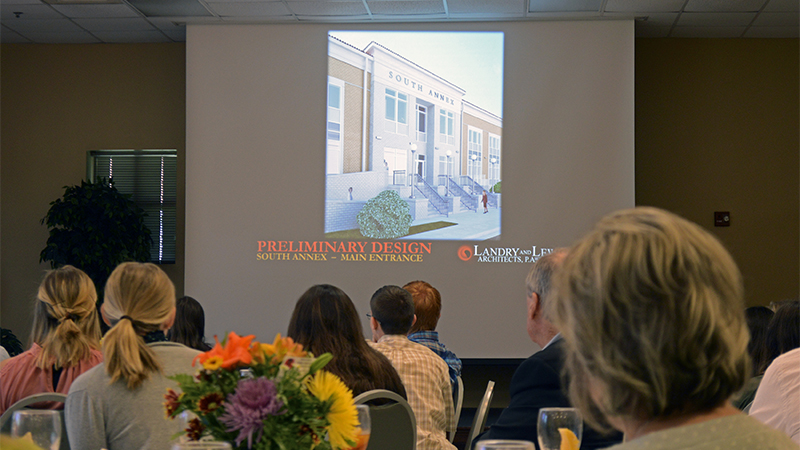 Attendees of the PRCC Lunch and Learn got a first glimpse of the proposed annexes to the Pearl River County Courthouse Thursday. Photo by Julia Arenstam

Pearl River County Administrator Adrain Lumpkin presented several renderings of the county’s proposed $13 million annex project to attendees of the Pearl River Community College Lunch and Learn meeting on Thursday.
Mike Patton, an attorney with Williams, Williams & Montgomery, said the 99-year-old building is dedicated to “all who love truth, justice and thrift.” Thrift, not meaning cheap, but a wise use of assets, he said.
He urged attendees to see the annexes not as something built for functionality, but a point of pride for the county.
Lumpkin said the master plan to construct two annexes, one on either side of the courthouse along Main Street, began in 2008. The county slowly acquired the property needed to construct the two buildings, one a two-story complex and the other three stories.
While the Board explored a one building option in an effort to save about $4 million, Lumpkin said that plan would only meet the county’s needs for the next 10 years, requiring another building when construction costs and interest rates had risen.
Lumpkin said that he is confident the county can afford the $13 to $14 million-estimated cost of the project without raising the millage rate.
The county previously brought up the proposal in 2011, he said, but at that time, it couldn’t have been done without raising the tax rate by three mills.
Since then, the cost of the project has already increased by $1.5 million due to rising construction costs, Lumpkin said.
Even if his projections were incorrect and the county did need to increase the millage rate, Lumpkin said one mill would generate about $350,000 a year, enough to cover the increased expense. A one mill increase would equate to $10 a year increase in taxes on residential property assessed at $100,000, he said.
He also addressed some concerns about why the Chancery Court would remain in the newly-renovated courthouse when it rarely uses a jury box.
Lumpkin said while that court may not need the jury box, it does need the extra jury rooms and chambers located behind the courtroom for private conferences.
“If you have questions, ask questions,” Lumpkin said, adding that a lot of inaccurate information has been spread through social media.
He said the county leaders who decided to build the courthouse 100 years ago had the future in mind.
“They weren’t crazy, they had a vision,” Lumpkin said.
He used the changes at PRCC in the last 30 years as an example; during that time the campus has grown and expanded to meet the needs of students and faculty.
“It takes vision and a strong backbone,” Lumpkin said. “If we don’t do something, we’re going to miss a golden opportunity.”
The next step in the process would be for the Board to vote to engage the architects to complete the drawings and move forward with a two-year time frame to finish construction.