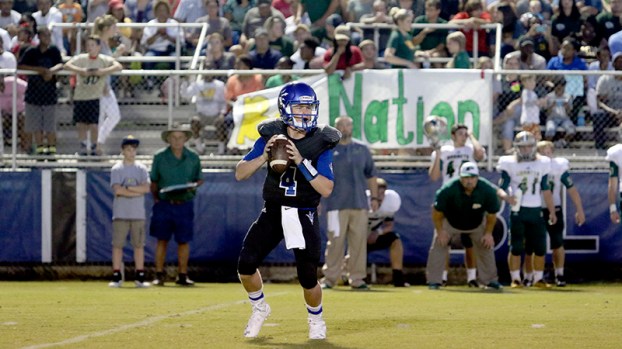 Wyatt Davis said he is enjoying his time in Scooba and is learning a lot in his first week at EMCC. Photo by Taylor Welsh

In the midst of the preseason for junior college football, Wyatt Davis, the former Pearl River Central quarterback, made a last second commitment change.

While working out in his fourth day as a Pearl River Community College Wildcat, Davis decided that PRCC was not a good fit for him, and left on his own accord. Later in July, he received a call from Bo Wallace, an assistant coach for the East Mississippi Community College offense.

During that call, Davis said Wallace expressed his interest in coaching him and wanted to know what he thought about joining the three-time NJCAA National Champions in Scooba.

At a loss for words, Davis said yes.

“I am extremely grateful for the opportunity the River gave me, but East Mississippi is a place I’ve always wanted to be,” Davis said. “Plus, Bo is someone I’ve always looked up to, so to be taken under his wing is a true honor for me.”

A week after that phone call, Davis arrived in Scooba and said it has been everything he hoped for.

After the airing of the hit Netflix series “Last Chance U,” East Mississippi Community College showcased why it receives the reputation of developing athletes into NCAA Division-I prospects, including over 140 athletes in the past nine years like Ole Miss’ Chad Kelly and Wallace, who went on to win the Conerly Trophy at Ole Miss for being the best college football player in Mississippi.

Although PRCC is less than 20 miles away from Davis’ hometown of Carriere, he found comfort in Scooba, a small town in east Mississippi with a population of 697.

“There’s nothing but woods and football here, which I actually enjoy. Everything is taken serious at EMCC. I eat and breathe football now and that’s the life I’ve always wanted,” Davis said.

Now, Davis is practicing against an EMCC defense that is packed with NCAA Division-I talent and competing against other quarterbacks of the same caliber.

“It’s a lot different than high school, but it’s going to make me better. I’ll be honest, I think the second string team could have a winning season if they formed their own team,” he said, describing the talent that looms on the EMCC team. “I feel like I have a good chance to succeed here.”

Despite the difference between high school and collegiate football, he said he learned a lot from his former Blue Devils coach Larry Dolan and intends on using that experience to develop as a quarterback.

“Coach Dolan always told me, ‘The more film you watch, the more prepared you are,’ and I took that to heart. I spent countless hours in the film room during high school with him and plan on doing the same thing at the next level,” Davis said, who threw for over 2,000 yards and 11 touchdowns with a completion percentage of 63 percent his senior year.

Davis is going to use his first year at EMCC as a learning experience. And although he wants to get on the field this season, Davis said he wouldn’t mind being red-shirted his first year.

“You can learn a lot here. If they red shirt me, that just means I get to learn more from these coaches and hopefully be a factor in the team’s success in the future,” Davis said.

The reigning MACJC stat champion EMCC Lions just started two-a-days in preparation of their season opener on Aug. 31 against Jones County Junior College, the team that gave EMCC their only loss in last season’s opener when the short-handed EMCC lost 27-25 to the Bobcats.

The 2017 football season kicks off in nine days and the teams are finalizing their rosters. In the heat of... read more