Participation trophies are depriving the youth

I’m not sorry for believing that children shouldn’t be raised to believe good things are simply handed to them. Instead, I believe everything in life should be earned. Awarding participation trophies to young athletes is sending a dangerous message.

In my experience, there’s a direct correlation between what kids learn in sports and how that knowledge is translated into the workforce with traits like a strong work ethic, leadership and teamwork.

Participation trophies have got to come to an end. It is all fun and games until a whole generation of children grow up thinking everything will be handed to them.

That is a frightening message. It can lead kids to think they will get into the college they desire with little to no effort; it can lead to kids applying to a couple of jobs, and truly being baffled that someone hasn’t just plopped a job in their lap. Participation trophies are something I have never enjoyed receiving with the exception of one instance.

I can remember one coach that handled it the way that every coach should treat participation trophies. At the end of a very rigorous postseason tournament, my team came in second place, so of course we got silver medals, but we were also bombarded with “a symbol of excellence,” also known as a participation trophy.

My coach reached under the table and presented each player with their very own trophy to bring home, despite not winning the tournament. That irked me back then, and it still does today. But instead of just handing us the trophy and giving us a pat on the back, he individualized each trophy, giving them an increased value.

As each player walked to the coach, he announced that player’s unique contribution to the team.

When I received mine, it made me feel like I was part of something great; that even though we didn’t win it all, I worked hard and contributed a skill that I can work on to get the big trophy.

It gave all the efforts I spilled on the field purpose. But far too often these trophies are given for little to no effort.

If society has gotten too soft to eliminate participation trophies because they think it will hurt someone’s feelings, then give the trophies purpose; don’t just dish them out like hotcakes.

Obviously, I am against them in the first place, but I do not see them going anywhere anytime soon. And for that reason, I stand behind my former coach as he legitimately made something out of nothing. 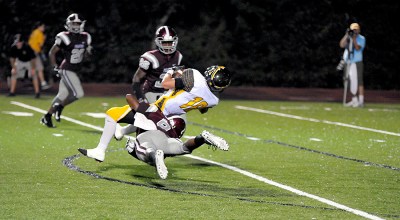