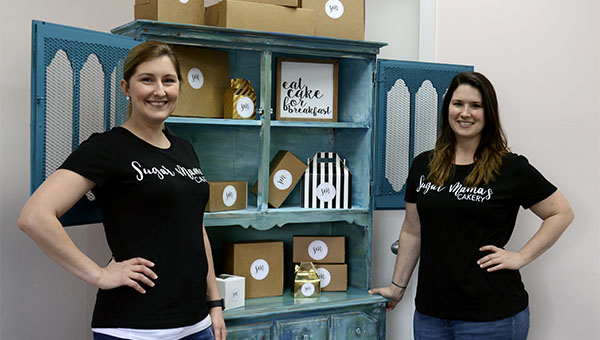 After six months in business, the one owner of The BAKE Project in Picayune is breaking out on her own to establish a separate bakery.
“The building that we chose from the beginning was a little small, and we were so successful from the beginning that we outgrew the space pretty quickly,” Brooke Rester, owner of the Dolce Bakeshop said.
Rester is preparing to move her shop to her new home in Long Beach, though she hopes to keep serving her Picayune customers through mail orders.
“I’m from the Coast and an opportunity fell in my lap at the right time,” she said. “It’s going to be a great move for our family.”
Meanwhile, the philosophy of the BAKE Project, which stands for building a kinder environment, will live on, Rester said.
“I’m going to take the BAKE Project with me to Long Beach…we still stand behind the mission of doing good deeds and acts of kindness,” she said.
Meanwhile, Confetti Custom Cakes and Katy Cakes have merged to form a new shop, Sugar Mama’s, which, after a quick facelift, opened its doors this week in the same location.
Sisters-in-law Colbi Moeller and Katy Smith have worked together for the past 10 years, they said, so combining their bakeries made sense.
The Sugar Mama’s moniker came up as a joke years ago, they said, but it stuck, and now that they have their own shop it was an easy decision to use the name.
“We’re excited to be working together on everything,” the sisters said.
While the store will keep the same hours, the space is getting a small renovation to accommodate more seating and display cases for their elaborately decorated treats.
Kimberly Kirby Designs, The Painted Mantle and other vendors will remain in the other half of the building, Moeller said.
“I think [The BAKE Project] helped a lot, I think the community really rallied around what our mission was, and still is,” Rester said.
The storefront on N. Curran Avenue opened in July after the women pooled together their resources to create a “one-stop party shop,” previous coverage states.
“I think it was really nice to have a group of friends to try this out together,” Rester said. “I never would have been brave enough to jump out and rent a place of my own if I hadn’t had this experience.”
Sugar Mama’s is open Friday from 11 a.m. to 5 p.m. and Saturday from 10 a.m. to 2 p.m.
For more information, find both shops on Facebook at Sugar Mama’s Cakery and Dolce Bakeshop.

Sheriff’s Department looking for suspects in burglary of unlocked…