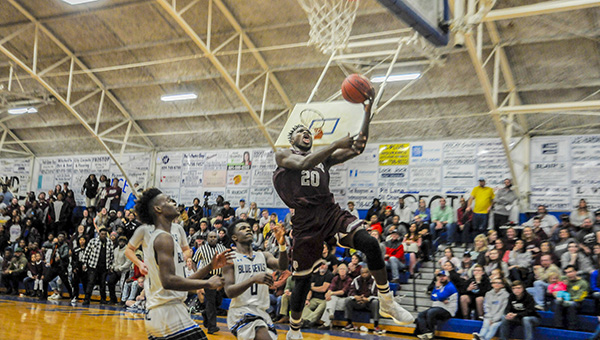 Stephane Ayangma linked up with his older brother in Picayune to play in a competitive environment and share quality time with his family.
Photo by Taylor Welsh

Stephane Ayangma, star of the Picayune Memorial High School basketball team, was born and raised more than 6,620 miles away, but his heart has always been in the same place, beating for his family and his love of basketball.

Ayangma grew up near the capital city of Cameroon, Yaoundé, and is the youngest of eight siblings. His father, Albert Ayangma, played basketball in his native country and one of his sisters played professional basketball in Africa, he said. Although Ayangma had these strong influences in his life, basketball wasn’t always his favorite sport.

“I grew up loving soccer, and I was pretty good at it too,” Ayangma said, hinting that his favorite teams are Barcelona and Real Madrid. “Everyone plays soccer in Cameroon, but after I started to get taller, people began telling me that I looked like I would be good at basketball.”

From then on, Ayangma slowly dipped his toes into the hardwood sport, practicing with one of his friends, but never fully diving into the American pastime until he participated in a couple of basketball camps in the 9th grade.

“After going to the NBA Basketball Without Borders camp in South Africa, I knew I wanted to play competitively,” he said, aspiring to follow in his brother’s footsteps and come to the United States to play basketball.

When Ayangma was only 6-years-old, his brother, Eric, left Cameroon for the U.S. to play basketball. Twelve years later, Ayangma headed to Kansas.

“Coming to the U.S. is a blessing. I have a lot of friends and know a lot of people in Cameroon and other African countries that can only dream about coming here,” Ayangma said. “This is a chance for me to play basketball and continue my story.”

At the basketball academy in Kansas, Ayangma joined a team filled with foreign and American players, including one from Nigeria, two from Serbia, three from the U.S. and two others from Cameroon. Half of the players were taller than Ayangma, who stands at 6-foot-6. He said it seemed like a perfect place for him to compete, but Ayangma’s expectations about the competitive environment of basketball were shot.

“Everyone was playing for themselves. It didn’t feel like I was part of a team. It was definitely a different mindset over there,” he said.

After spending a season in Kansas, Ayangma’s brother, Eric, assistant coach at Picayune Memorial High School, told Ayangma that he wanted to spend the year with him, convincing Ayangma to come to Picayune to play basketball. Ayangma proudly said, “Yes.”

“I take life step-by-step. I don’t want to be in a rush or worry about anything. I just want to take everything one step at a time and let whatever happens, happen,” Ayangma said.

After Ayangma arrived in Picayune and participated in his first practice, he knew he was in the right place.

“Oh my gosh, the basketball here is exactly what I was hoping for when I came to the U.S.,” he said.

From practice to games, Ayangma said everything is “perfect,” and being reunited with his brother makes the experience even sweeter.

“Coach makes everyone on the same level. We all look as a team, act like a team and play like a team, which makes it easier for me to enjoy,” Ayangma said. “He doesn’t just make me a better player, he makes me a better person.”

In Ayangma’s first year at Picayune, he averaged 22 points and 11 rebounds per game, leading the Maroon Tide to its first district championship since the 2007-08 season.

“He is just a great kid. So humble, so polite and really hard working; just everything you want out of a player,” Thompson said. “Eric was really excited when Steph was coming over because he hadn’t seen his little brother after he left Cameroon. They are so much alike and he’s so refreshing to coach. He just wants to win.”

Thompson said that Ayangma will do anything to win, and this season, he has played a position he will most likely not play in college for the betterment of the team, with no complaints.

Ayangma currently plays center for the Maroon Tide, but has a unique style of play, being able to do virtually anything on the court from shooting from the perimeter to posting up between the blocks.

“I don’t like to say I shape my game after anyone else, because I like doing my own thing and create a style of my own,” he said. “If someone is a great player, I will watch them, take what I think they do well and mix it into my own style.”

As for his plans for the future, the senior at PMHS continues to take life step-by-step.

“I want things to just happen. I think it’s better when you show people rather than tell them, so we will see where life takes me,” he said. 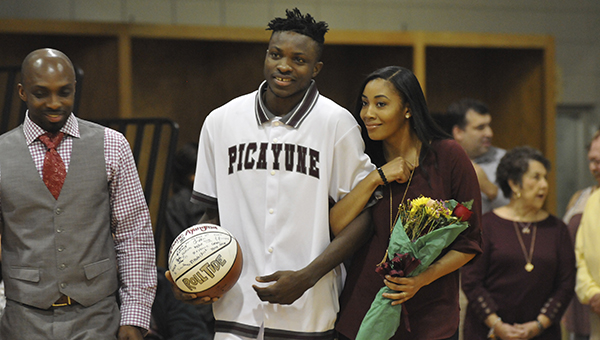