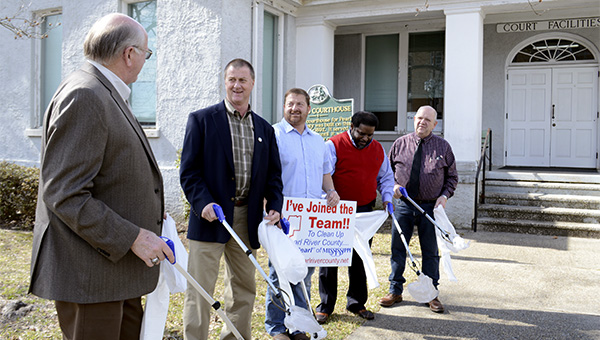 During Monday’s meeting, the Pearl River County Board of Supervisors discussed strategies to combat the litter problem, including a potential countywide cleanup day.
During a monthly update from the code enforcement and animal/litter control departments, District I Supervisor Donald Hart suggested holding an annual or semiannual cleanup day similar to those held in Poplarville and Picayune.
Though most of the regular dumpsites have been cleaned since the installation of cameras, county Code Enforcement Officer Kolby Davis said county codes are becoming hard to enforce for litter on the highway and on personal property.
“You see it just about everywhere you go, sometimes I know that I come up behind somebody [is] throwing out McDonald’s or whatever just to keep it out of their car,” Hart said.
Hart suggested the theme, “Pick up Pearl River County, make her shine like a pearl,” and the gathering of community leaders, private organizations and church groups to start to change public perception about litter.
“It’s a culture we have to change,” Board President Sandy Kane Smith said.
“The unique thing about it would be to have all of our supervisors and elected officials, every civic organization we can think of…faith based organizations…everybody we can get involved in this,” Hart said. “I’m not talking about [picking up] household garbage, not hazardous, I’m talking about litter.”
County litter and animal control officer Danny Joe Slade said a large part of the problem is private trash collectors who don’t properly transport waste to Central Landfill.
“When I started this job, I noticed the litter, but it was in the shadows. Now, starting this job I’m tapping the brakes and getting out to pick stuff up,” Slade said.
Pearl River County Chancery Clerk Melinda Bowman said encouraging high school students to create an organization to help with the litter problem would not only help the county, but it would provide a resume building experience.
Board Vice President Hudson Holliday said presenting children with anti-littering information while they are in school could also help curb the problem. Specifically, Holliday suggested purchasing anti-litter coloring books to hand out to first grade students.
Holliday also said that several years ago the Board discussed anti-litter campaign ideas including the design of superheroes Litter Boy and Trash Man, or collecting litter on a large tarp so passersby could see how quickly the trash piles up.
By introducing litter prevention to young children, the Board hopes it will influence adult behavior.
Slade feels that children are able to influence their parents by shaming them into ending their habit of littering.
Smith said he has seen in his own family how the school system’s anti-smoking campaign has curbed the habit in some of his adult family members because the students would tell them how destructive it is.
“We have to do something to make people second guess throwing out trash,” Hart said.
The Board approved Hart moving forward with planning a cleanup day with the county code enforcement, litter control, volunteer fire departments and the municipalities.
More information about Monday’s Board meeting will be published in Wednesday’s Item.
The next Board meeting was scheduled for Feb. 22 at 9 a.m.