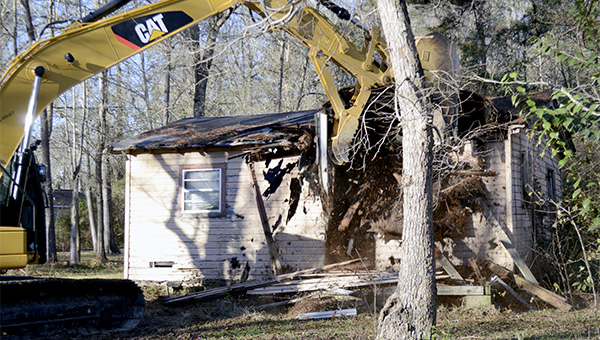 A long-abandoned house on N. Abrams Ave. was demolished by the Picayune Public Works Department on Friday.
Photo by Julia Arenstam

The Picayune Public Works Department added one more house demolition to the list for 2017 on Friday morning.
A long-abandoned home at 517 N. Abrams Ave. was demolished after the city received last minute approval from the Mississippi Secretary of State’s Office, Picayune Code Enforcement Officer Tom Milar said.
Ownership of the home was turned over to the state after the previous owner failed to pay property taxes, Milar said.
As a result, the city will bear the cost of the demolition until the property can be sold and added to the city’s tax rolls, Milar said.
He estimated the home stood vacant for at least 10 years, and was in a state of severe rot by the time of the demolition on Friday.
Neighbors’ complaints about the property described it as a nuisance and a site where suspicious behavior took place, prompting the city to work with the Secretary of State’s office to remove the home, Milar said.
The property is made up of two 45-foot frontage lots, Milar said.
The city has since changed ordinances to establish construction on larger lots, while grandfathering in the outdated, small lots for new construction, he said.
Out of the 36 state-owned properties within the Picayune city limits, Milar said the structure torn down on Friday was in the most severe state of decay.
Another handful of properties have houses that aren’t suitable for occupancy, but could be repaired, while the rest are vacant lots, he said.
The city is working with the Secretary of State’s office to see how those properties could be sold and put back on the tax rolls to stimulate growth and revenue, Milar said.
The Public Works Department demolished three other residential buildings this year, two that were vacated due to fires and one two-story brick building that was stripped of all the metal, previous coverage states.