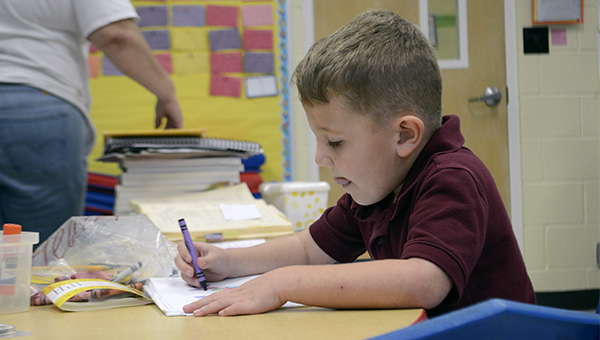 Julie Dennis teachers her kindergarten class at Westside Elementary School about the difference between natural and man made objects, asking them to draw their favorite natural environment.
Photo by Julia Arenstam

Mississippi state law mandates that children must attend either a public or private school if they are 6 years of age by Sept. 1 of that school year.

For many of those directly involved in the education system, the compulsory age is astounding and troublesome.

Julie Dennis is a kindergarten teacher at Westside Elementary School in Picayune, and in her past 30 years as an educator, she has noticed a gap between students who have attended pre-K and those who haven’t.

“The children notice, too,” she said.

In her classroom of 17 students, each child has a different background and different skills set; some can write fairly legibly, some can read, and yet others are being introduced to formal schooling for the first time.

Dennis said she emphatically believes kindergarten should be mandatory for children once they reach 5 years of age.

According to the Education Commission of the United States, Mississippi is one of 35 states that does not require kindergarten attendance.

The organization also states Mississippi is one of 26 states that require children to enroll in school by the age of six.

“The earlier that kids are exposed to education, the better they do by the time they reach third grade,” Picayune Early Head Start Director Pam Thomas said.

In both the 2015 and 2016 state legislative sessions, the House Education Committee has been tasked with debating whether the compulsory school age should be reduced to include 5-year-olds.

Rep. Mark Formby, of District 108, said just because a bill has been filed, “it doesn’t mean it’s on anybody’s radar screen.”

Formby said the committee hasn’t debated the bill to date, and he has no formal position on the matter.

Looking at both sides of the argument, Formby said some people argue that mandating kindergarten will allow children to get a jump on developing their reading and writing skills.

“However, I have read numerous articles by educational professionals that say while there may be some truth in that, by the end of first grade, you cannot tell who had kindergarten and who didn’t,” he said.

“I think that kids who have not been exposed to early education have to play catch up,” Thomas said. “They have to learn things that others learned when they were 2 or 3-years-old.”

This is coming “at a time when people are saying we’re not funding education enough,” Formby said, adding that education makes up 52 percent of the state budget.

The state would then be responsible for funding those additional students, who, depending on their situation, could also qualify for free lunches, Formby said.

Statewide, there were 37,567 students enrolled in kindergarten classes the same school year.

Formby said those students are already being paid for by the state, and he was unsure of the additional cost to the state if all 5-year-old children were required to enroll.

In terms of the cost to the state, Formby said additional funds would be needed for classroom space, teachers, transportation and supplies.

“To me, education is about cost and return,” Formby said.

He also said that when he speaks with members of the education community, he receives mixed feedback about the issue.

Students learn how to get along with other children, as well as adults and learn about respect and sharing, Thomas said.

“Their social skills formulate them as a person,” she said.

However, Formby said, “teachers tell me regularly that’s it’s not their job to socialize students; it’s their job to educate.”

The 2017 regular session for the Mississippi Legislature will begin on Jan. 3, and the deadline for the introduction of general bills and amendments is Jan 16. 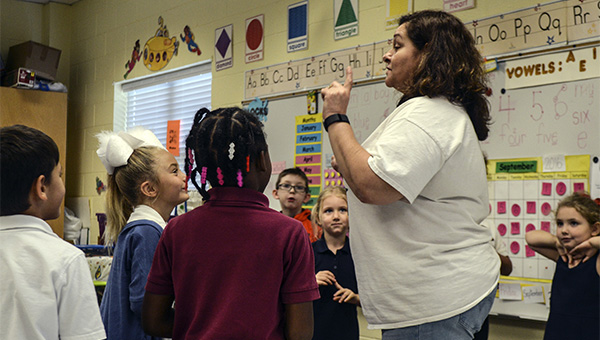 PRCC enrollment up, despite statewide decrease