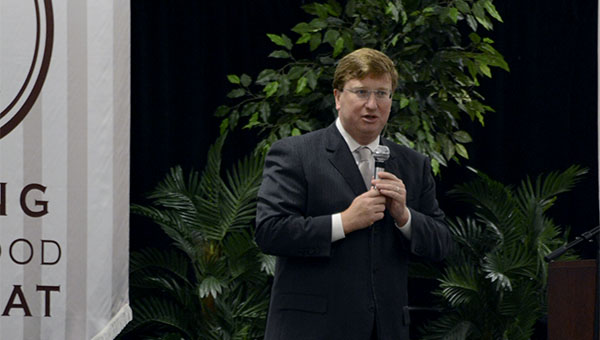 Lt. Governor Tate Reeves spoke at Pearl River Community College Monday about his political aims and achievements from his past five years in office.
Reeves was introduced by PRCC President Dr. William Lewis, who has known Reeves on a personal and professional basis for a number of years.
“He’s always been the smartest guy in the room,” Lewis said. “And one of the most committed in state government.”
Also in attendance were State Senators Angela Burks Hill, District 40; Phillip Moran, District 46; Joey Fillingane, District 41; John Polk, District 44; and Mike Seymour, District 47.
As Reeves took the podium, the audience, consisting of PRCC faculty and staff, gave him a standing ovation.
“The main thing is to keep the main thing the main thing,” Reeves said, explaining one of the political ideals he learned from Mississippi Governor Phil Bryant.
In his speech, Reeves focused on what he says are the three components to improving the state economy through job creation.
“The government does not create jobs, it creates the environment that encourages the private sector,” Reeves said.
Reeves’ three components include: fiscal responsibility, tax codes and education attainment.
In terms of fiscal responsibility, Reeves said that within three years, the state budget equalized the amount of recurring income with recurring expenses.
The state rainy day fund has also been increased to $410 million, or 7.5 percent of the annual budget, Reeves said.
He refuted criticism that the state budget was a “mess,” saying, “Nothing could be further from the truth.”
Mississippi has the third largest rainy day fund in state history, Reeves said.
He repeatedly emphasized PRCC’s motto of “moving from good to great,” saying the state was working with the same philosophy.
Reeves’ second component, tax codes, should be used to promote economic development, particularly for small businesses, not discourage it, he said.
Taxes should be fair, flat and encourage economic development, Reeves said.
“We have fought to reduce taxes that made us economically uncompetitive,” Reeves said.
Those taxes include inventory tax and corporate franchise taxes, which Reeves called “the stupidest tax on the books” because he believes they discourage capital investment by small businesses.
He said he has also fought for a three percent reduction in individual income tax, which will take four years to implement, Reeves said.
He also refuted accusations that the state has been giving tax cuts to large corporations.
In 2011, the state collected $440 million in taxes from large corporations and in 2016 that number increased to $590 million, Reeves said.
“We don’t want your tax burden to go up, we want more taxpayers,” Reeves said.
The third component of Reeves’ plan provides for improving educational attainment levels in the state, pushing for more high school and two and four-year college graduates, he said.
Reforming education will come with continuing efforts to raise the level of expectation, consolidating school districts and spending more money in the classroom and less in district offices, Reeves said.
In 2016, the state graduation rate rose to 80.5 percent from 70.5 percent in 2011, compared to the steady national average of 82 percent, Reeves said.
“Really, really good things are happening,” Reeves said, after criticizing the media for not printing enough about the state’s successes.
Reeves, along with Governor Bryant and House Speaker Philip Gunn recently convened a special tax study panel of 14 bipartisan state legislators to look at the state’s revenue and expenditures.
Reeves said that money awarded to the state because of the BP oil spill should be used for long-term economic development, particularly in South Mississippi.

Pearl River in need of help