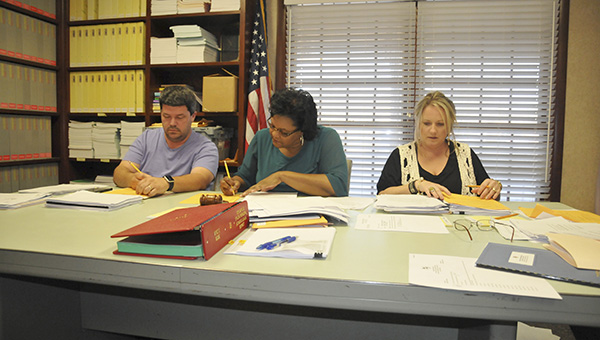 CONSOLIDATION DISCUSSION: The Poplarville School Board discussed the possibility of accepting students from the Lumberton School District if Senate Bill 2500 passes during Monday’s meeting. From left are board members Tommy Strahan, board president Violine Jordan and Lisa Graves.
Photo by Cassandra Favre

Monday, the Poplarville School Board discussed Senate Bill 2500, which intends to consolidate nine school districts within the state, one of those being the Lumberton School District into Poplarville’s.
On March 2, Mississippi’s Lt. Gov. Tate Reeves announced the bill will soon head to the House for consideration.
“Consolidating districts is about putting more money in the classroom and less in the office,” Reeves said in the release.
Senate Bill 2500 would dissolve the Lumberton School District, which has 585 students and merge it with Poplarville and Lamar County School Districts, the release stated.
Poplarville School Board attorney James Keith said Senate Bill 2500 was brought about at the legislative level, neither Poplarville, Lumberton or Lamar County school districts requested the consolidation.
“Until the law passes, we really don’t have much to say about it,” Keith said. “If the legislature is going to do this, I can tell you it will take longer than two years to do it effectively and it will cost you some money.”
If and when it becomes law, the district will become aware of more of the facts, including the number of students who will be attending Poplarville schools, Superintendent Carl Merritt said.
“I want us to be aware that this could happen and I want Poplarville to accept those children and make the transition smooth for those parents and kids,” Merritt said. “I’ve been told this is a possibility and that it’s coming in some sort of fashion.”
Keith told the board superintendents are meeting with legislators to discuss the bill’s details.
“The devil’s in the details,” he said. “The problem is practical issues, where the bus routes ride. For some of those kids, it might make sense geographically for them to go north or south. You’ve also got the homeschoolers, if they believe that it’s time to move back into the public education system because of consolidation, you may get some students that you don’t know about right now. However, the state would know how many of those there are.”
If the district received 150 students, the board would also have to consider the number of teacher units and space available, Keith said. Another item he mentioned considering is the existence or non-existence of Lumberton’s debt.
Poplarville School District Finance Director Samantha Sandifer said she sent a letter to legislators outlining many of her specific financial questions about the bill.
Merritt told the board he has more meetings planned with the Mississippi Department of Education and Keith said legislators are listening to administrators.
“The senators have asked us to come back and are communicating with Lumberton and Lamar County,” Merritt said. “The main thing is that the politicians in Jackson have been receptive and given us more time. If it’s going to happen I want to make sure it’s right.”
In other action the board:
• Reviewed the audited financial statements for the fiscal year ending June 30, 2015. Sandifer said the audit was good.
• Approved a Multicultural America Inc. on-site professional development day. Motivational speaker Larry Bell will speak to teachers.
• Approved the LEA plan for highly qualified teachers. Poplarville School District Federal Programs Director Konya Miller said the district’s teachers are 100 percent qualified. However, a plan needs to be in place.
• Approved a district paraprofessional evaluation tool. Miller said administrators found the old tool to be outdated.
• Accepted a Mississippi Hospitality and Restaurant Grant, which provides food for students in the culinary class to cook, Merritt said.
• Approved Merritt’s recommendation to excuse student absences during last week’s inclement weather.
The board will meet again on April 11 at 6 p.m. in the boardroom on Julia Street.
You Might Like

ISCUSSING DAMAGE: Residents along Morgan Seal Road talk about damage to their homes Monday as the flood waters were receding... read more