Theatre group to visit South Side 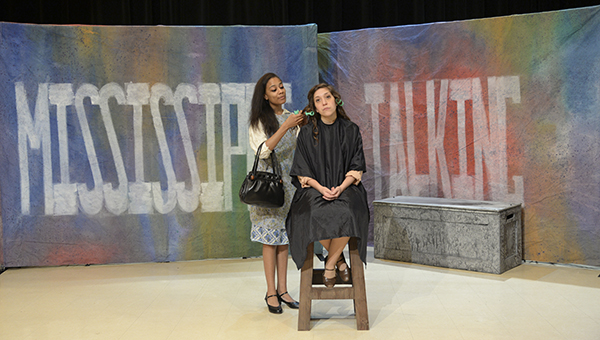 Submitted photo | Picayune Item
front and center: Two performers with the New Stage Theatre company perform a scene from “Mississippi Talking: Scenes from Mississippi Writers.” The company will give a performance on Friday.

Eudora Welty is coming to South Side Upper Elementary.

As is William Faulkner. And John Grisham.

Well, their words are, anyway.

On Friday, the New Stage Theatre company will stop by the school and perform “Mississippi Talking: Scenes from Mississippi Writers.”

The Jackson-based company goes to schools across the state and performs a variety of youth-oriented shows.

Jeremy Williams, a sixth grade reading and social studies teacher, said the fact that the group does road shows was one of the attractive things about the program. Williams authored an Artful Thinking Grant through the Lower Pearl River Valley Foundation that is used to pay for arts education, and he said having a group come to Picayune is much easier and cheaper than organizing a field trip to Jackson. Williams said the New Stage Theatre company will perform the play in the afternoon, and in the morning they plan to take 20 to 25 kids through a theater workshop.

And, he added, the timing couldn’t be better.

“We’re excited about it and it was perfect this week, because (the kids are) coming back off of Christmas break,” he said.

“Our primary purpose to do this show is to make sure the kids are aware of all these great writers and artists that come from Mississippi and to let them know they should be proud to be Mississippians,” he said.

Williams said the show will introduce students to some of the authors they’ll explore in class late this spring.

Roebuck said the show will feature a wide range of voices and talents.

“It’s a show that basically takes scenes from different works from Mississippi writers,” he said. “Everyone from Faulkner to John Grisham and all points in between.”

Naturally, Roebuck added, the pieces performed will be as different as the authors.