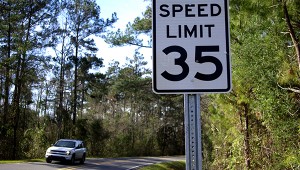 Jesse Wright | Picayune Item
Can’t drive 55: Speeding tickets are rare in most counties in Mississippi. That’s because most sheriff’s deputies are forbidden from using radar by state law. The state’s sheriff’s association is advocating for a law change this year though.

State lawmakers returned to Jackson this week, and already they’re working with constituents and lobbyists on the rough, early editions of what could become new laws.

One of the groups meeting with legislators is the Mississippi Sheriff’s Association, and this year, they hope, will be the year deputies will be able to use radar in counties across the state.

For decades, at least since the state’s 1972 criminal code, deputies have been unable to use the speed tracking technology. By state law, only city police, college campus police and the Highway Patrol may use radar.

Only deputies in Lowndes County, under a special dispensation by the state legislature, may use radar.

No other sheriff’s department has that right, though each year in recent years sheriffs across the state have urged the legislature to change the law.

Jones County Sheriff Alex Hodge, the president of the sheriff’s association, said he hopes this is the year the law is changed.

“The only change were asking is that county sheriffs departments may use radar,” he said. “It’s just that simple.”

In other words, the words “may use” will remain in the law. Hodge’s argument is, giving sheriff’s departments the choice to use radar will not mean radar will be required.

“It’s totally up to the sheriff,” Hodge said. “If he doesn’t want to use it, he doesn’t have to use it. That’s fine.”

Pearl River County Sheriff David Allison said he would certainly like to use radar technology.

“I think it will be a good tool to use to slow people down on county roads,” he said. “I feel like it will save lives. We have a lot of accidents on the county roads that are attributed to speeding.”

But not everyone is onboard with the idea.

“I am not in favor of it,” he said. “We have a Highway Patrol, and normally if you have a problem on a state or on a county road in the state … where you have someone speeding, they don’t have to set up but two or three days every other month, and most of those fines run about $200 depending on how fast you’re going and that tends to get people’s attention.”

Tickets start at upwards of $220, but of that, the county only gets $105 per ticket, according to the county’s justice court clerk Kathy Mason.

But even so, Seymour says speed traps could be an attractive way to make easy money for a county—especially from out-of-county residents.

“Oh yes, it is a big money generator,” he said. “The scenario isn’t always this, but you could run into a good old boy sheriff’s department and a lot of times, if you’re from out of town, you’re paying.”

Allison said the notion that sheriff’s departments want to use radar merely to set up speed traps is false. Besides the fact that tickets would not bring in a lot of money to the county, Allison points out that an overdose of traffic tickets is a good way to lose an election.

“I think the sheriff would be crazy to misuse radar,” he said. “He’s an elected official. It’s good tool that could be used right now to help slow people down. A lot of the young kids know that the county sheriff’s deputies don’t run radar so they don’t have to abide by the speed laws.”

Many of the county roads are posted at 35 miles per hour, and those speeds are frequently ignored. But Allison said it is a problem that needs to be addressed to the Pearl River County Board of Supervisors, the body that sets county speed limits.

“I agree that a lot of the county roads are pretty good, and the speed limits are too low,” he said. “Some need to go to 45 miles per hour, but that would be a call on the county supervisors.”

As it stands, deputies aren’t wholly without power to enforce speed laws.

Allison pointed out that deputies could write tickets for careless and reckless driving, but he said those tickets don’t have the same effect as speeding tickets at reducing overall speeding.

First, Allison pointed out, if all a person is doing is speeding, then a deputy would need to be behind the driver to notice.

Also, Allison added, those tickets have worse consequences for insurance rates than a simple speeding ticket because they imply a worse degree of vehicular control. Allison said he’d rather not use those tickets for mere speeders.

“We hate to use those for speeding because they hit their insurance pretty hard,” he said. “We do occasionally use them, but only for people that really deserve them.”

According to Mason, the Pearl River County justice court clerk, deputies rarely write those tickets for anyone.

Despite the low number of tickets, the sheriff’s department’s statistics show serious car crashes have crept upward in the county.

Sheriff’s departmemt data show that across the county, accidents were up by 25 percent last year through May, with some individual roads seeing significantly greater increases. Caesar, Anchor Lake, McNeill-Henleyfield and McNeill Steephollow roads have all had their accident rates double in the past year.

Hodge believes a simple change in state law can bring those numbers down.

“I would only put it in a select number of cars,” said the Jones County sheriff. “But that’s just me. … I’d just put it in certain vehicles to use in certain high traffic areas where I’m having a lot of wrecks and a lot of accidents.”

Besides, Hodge said, even if only a few marked cars have radar, anyone who sees any marked car will automatically slow down after the tickets start coming.

Hodge’s hope is state legislators will unite around the issue of safety.

“We’re very hopeful,” Hodge said. “What we’re doing right now is trying to get as many legislators and senators to sign on to the bill as we can before we drop the bill.”

Hodge said he won’t know for another week at least when the bill will be introduced, and in the meantime he’s trying to get all the signatures he can on the legislation.

“We’re trying to get as much momentum on the bill as we can,” he said. “We’re trying to build a coalition of both Republicans and Democrats so people are educated on what our position is.”

Hodge suggested that residents who favor radar usage by deputies should let their representatives know.

“Those that are in favor of it, reach out,” he said. “Call your representative, and call your your state senator to say, ‘Hey, I support my sheriff.’”