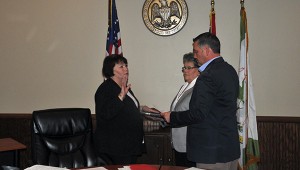 Tuesday, the Poplarville Board of Aldermen began the first board meeting of 2016 with the swearing in of city clerk Jane O’Neal and Poplarville Police Chief Don “Butch” Raby by Poplarville Mayor Brad Necaise.

After the ceremony, the aldermen addressed the lighting situation on Shivers Street and the relocation of the recycling receptacles at the city’s Recycling Depot.

As one of his first actions as chief, Raby requested the installation of two streetlights on Shivers Street, one to be placed behind the business Little River Outdoors and one behind the Kangaroo Express.

“I requested the lights in light of the recent burglaries at Little River Outdoors,” Raby said. “It’s pitch dark out there, and if we shine more light, it might deter some of the criminal activity we’ve been having right there. There is also probably some drug activity going on as well.”

The board voted to approve the installation of the lights.

In 2015, Poplarville’s Recycling Depot was made available to the public. It features three recycling receptacles for aluminum and plastics.

However, according to the board, many people have been dumping trash at the site, rather than recyclables.

Hale suggested to the board that they move the receptacles to three locations at City Park.

“We can place one of the plastic bottle receptacles by the splash pad, an aluminum one by the Coke machines and other by the big gazebo,” Hale said.

The board voted to relocate the recycling receptacles to City Park.

–– The board approved a new policy to only use towing services recognized by the Mississippi Highway Patrol. Aldermen Glenn Bolin recused himself from the vote because he is the owner of a towing business.

The next board of aldermen meeting will be held on Jan. 19 at 5 p.m. in the boardroom at City Hall.