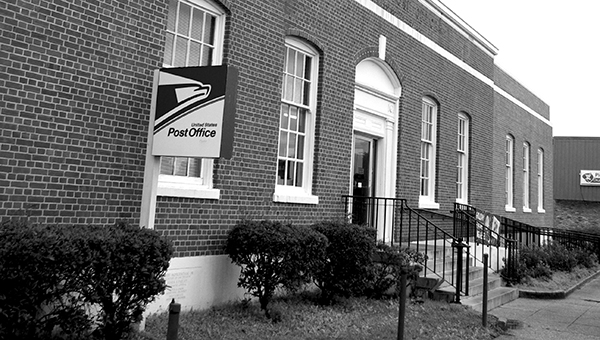 Jesse Wright | Picayune Item
more than meets the eye: A historic mural, one of many from the WPA, is still on the wall at the downtown post office, although it’s been covered with paint. Still, if funds are raised, it could be restored.

Walk through the glass door of the downtown post office and, before walking into the glassed mail service area, take a minute to look to the left, at the wall above the door marked for employees only.

The wall is beige and blank.

But according to historians, underneath the beige paint—and maybe more layers than that—is the 12-foot by 6-foot mural painted by Donald Hall Robertson titled, “Lumber Region of Mississippi.”

A website dedicated to historic preservation in Mississippi, Misspreservation.com, includes an article about the downtown post office’s mural by local historian Mark Davis.

Throughout the Depression, President Franklin Roosevelt’s Works Progress Administration paid artists for public art projects, and one frequent project was murals on federal buildings. Frequently, Davis writes, the subject of those murals was regional daily life.

The current postmaster of Picayune, Joanna Laine said she has only been working at the Picayune location for a few years, so she is not yet familiar with the history of the main post office building downtown.

However, according to Davis, the downtown post office was built sometime in the late 1930s or early in 1940, because Davis writes that the post office was new in 1940 when Robertson, a Washington, D.C.-based painter, came to Picayune to paint a mural.

Photos of the mural show a yoke of oxen hauling a wagon loaded with felled trees from the forest. A burly, bearded man sits on the wagon behind the oxen, while two other men stand to the side. The whole scene is painted in dark tones that shift from black to gray—never quite white. It’s a mural about a hard country sort of life, itself a stark departure from other rural public murals included with Davis’ article. The other murals show off country idyll—steamboats, dances and general displays of optimism during a time of national financial despair.

Davis writes that he believes Robertson based his mural on old logging photos from the turn of the 19th century.

Even when he painted the wall, the world he was designing wasn’t quite there anymore.

It’s not exactly clear when Picayune’s unique mural disappeared under a roller brush and a coat of paint, but Davis reports that sometime in the 1970s, when Robertson and his wife called to ask about the mural, it was already gone.

But, of course, it’s still there.

Laine said the post office’s annex office is now the hub of Picayune’s postal activity. Out of 50 local postal employees, only three work at the downtown branch, Laine said.

“It houses the routes,” Laine explained. Meaning the 27 mail routes, some in town and some rural, are run out of the annex’s office.

But, even so, the downtown branch is still important.

And even in the age of e-mail, it still sees heavy traffic. Laine explained that on any given day, the local post offices processes about 1,000 parcels, and during the holiday months, they could see several times that amount—and both offices can have waiting lines testifying to the importance of the post offices.

Life has changed somewhat in the Pine Belt since Robertson first dipped his brush in ink, but as Davis points out, in recent years, efforts have been made to reconnect with those old murals.

In 2012, LSU began work uncovering and restoring some of its Depression-era artwork, and Laine said she suspects the post office wouldn’t be opposed to restoration, if someone would only pay for it.

“If the historical society wanted to do that and fund it, I believe the Postal Service would let them,” she said.