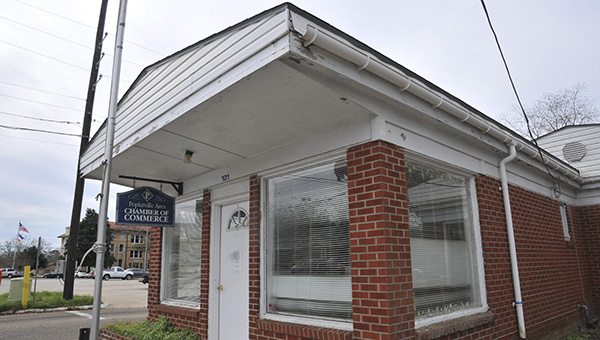 THIS BUILDING IS CONDEMNED: The building at 101 N. Main St. was originally built in 1948 for the city’s fire department. It has been deemed unsafe by city officials since September 2015 due to termite damage.
Photo by Cassandra Favre

In recent months, the city-owned building located at 101 N. Main St. has been the topic of discussion at many aldermen meetings since the discovery of Formosan termites.
However, this building has been around for many years and housed many of the city’s most important entities.
From what former Poplarville Chief of Police Pete Carver recollects, the building was built around 1948 for the fire department.
“They always parked their fire truck in the back on the concrete slabs,” Carver said.
When he began his law enforcement career in 1952, the police department was in the old Masonic building, he said.
But about 15 years after the building’s construction, the police department and city clerk were moved into the one room office, Carver said.
“The city clerk had two people in the front and the police department shared the middle room,” he said. “We only had two men in the department then. We worked seven days a week, 12 hours per day. There was also very little crime back then. Court was also held there and records stored.”
When the new city hall was built in the early 1990s, on Highway 26, the building became home to the Poplarville Area Chamber of Commerce, which still resides there today.
In 2014, the building became home to another resident, the Poplarville Historical Preservation Society’s museum.
Their first exhibit paid tribute to the nation’s military veterans who served in conflicts such as World War I and II, Vietnam, Korea and Afghanistan, Poplarville Historical Preservation Society President Joan Bassett said.
“It has worked out great,” she said. “Folks visit the chamber in the front and then visit the museum and vice versa.”
Behind the building, stone benches and flower arrangements now sit atop the concrete slab, where the fire truck once sat. Bassett said there are plans to restore the old fire truck. She also added that there used to be a water tower located on another concrete slab.
The building was condemned in September 2015 by Code Enforcer Guy Holston, who deemed it unsafe for the public to enter, due to termite damage.
However, at the December meeting, Public Works Director Sam Hale told the board that the damage to the building seems to be repairable, as there were no signs of active termites in the structure.
At that meeting, the board voted to obtain specifications on the building, which would include ADA compliance upgrades, HVAC and electrical repairs.
At the next meeting, which will be held Tuesday at 5 p.m., Keith Lott will address the board regarding his evaluation of the building’s condition, Poplarville City Clerk Jane O’Neal said.