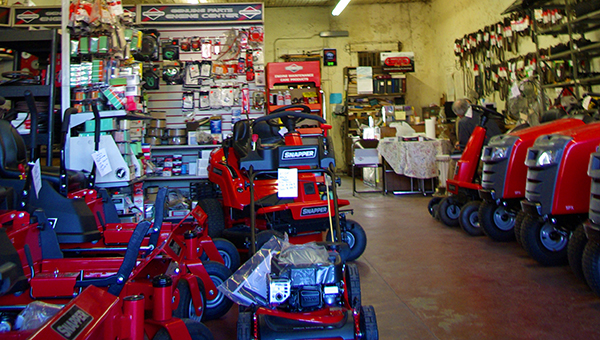 Jesse Wright| Picayune Item
more to come?: The city has hired a private consulting group to focus on development of retail businesses, like Lawn Mower and Small Engine Service on West Canal.

Christy Goss, the director of special projects for the city of Picayune, said the economic development group Retail Strategies is doing good things for Picayune.

The city hired the consulting group last May with a $50,000 one-year contact. Retail Strategies was tasked with luring retail business to Picayune.

Representatives from the group met with city officials in mid-December to give an update on their work. Goss said the first thing the group did was gather all the economic and demographic data they could about Picayune and then present that information at various industry trade shows and conferences.

One of those conferences was RECon 2015, which Retail Strategies describes in a PowerPoint as “the largest retail real estate conference of the year.”

According to the presentation, which the city provided, Retail Strategies presented information about Picayune to retailers, brokers and developers.

According to the PowerPoint presentation, Retail Strategies met with “over 65 retailers, brokers, developer and property owners.”

However, Goss said the specific details of who the group met with are kept classified until a deal is reached.

“They can’t really give us a listing of the names of the companies at this point,” Goss said. “But they’re things that would fit our community.”

“This has nothing to do with manufacturing,” said Harvey Miller, the city’s director of operations. “This is retail, restaurants, hotels and businesses.”

Miller agrees with Goss that the city is getting its money’s worth.

“There are a couple of franchises I can’t mention that are looking at us as we speak,” he said.

Goss said read progress from development consulting firms isn’t usually made until the second or third year out. She added that Retail Strategies asked the city for a three-year contract, but the city council would only commit to a year.

“We did do it as a one year contract and it’s based on performance,” she said.

Miller said if the city extends the contract, the fee will decrease for the next year.

“If we’re satisfied with them and if they’ve bared fruit so to speak, we can renew the contract for $30,000,” Miller said.

Miller said he didn’t know yet what kind of economic impact the group might have on the local economy.

“What they can and what they’re going to bring in, well, that will remain to be seen,” he said.

“We just have to keep being positive and give them time to do what we hired them to do,” she said.