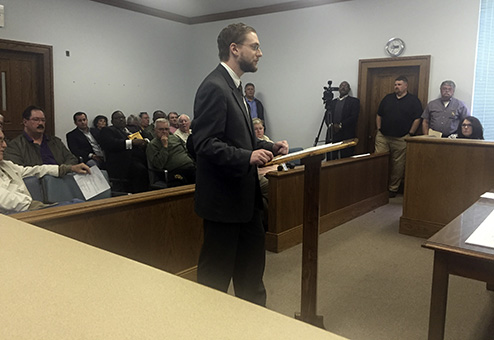 Wednesday, the Pearl River County Board of Supervisors decided not to renew a contract with Butler Snow after hearing concerns from citizens about its failure to bring economic development to the county.

The board entered into a contract with the law firm in 2012 to manage the county’s economic development efforts to attract businesses and boost employment, which Kelly said is a waste of the county’s time.

“One of our concerns is the idea of hiring an outside firm and charging them with economic development to begin with,” Kelly said.

The previous contract required the county to pay the firm $450,000 within a three-year period to assist with economic development, according to previous Item coverage.

“The expectation was that Butler Snow would deliver new business to the county in order for our citizens to prosper and earn more money and for the general value of this community to increase. And that did not manifest,” Kelly said. “We want to see our county richer, wealthier and better employed. We need to keep our tax dollars within the county.”

He recommended the board make the contract public and hold a hearing to get public feedback, however, the board immediately agreed that it was time to cut ties with the contract in order to move the county forward.

“I voted for it the first time, I’m man enough to admit it, I’ll try anything for economic development in this county. I’m ready to part ways with it. I’m willing to look at something different for this county,” District V Supervisor Sandy Kane Smith said.

District IV Supervisor Farron Moeller said the contract hasn’t resulted in anything positive for the community.

“There is a place for Butler Snow, but when you start dealing with Washington that kind of stuff worries me. I want our own folks working here,” Holliday said. “We may hire Butler Snow at some point in time as a consultant. But economic development needs to be paid for by the county, the city of Picayune and Poplarville, we need to all be in the game.”

The board’s decision was met with applause from citizens attending Wednesday’s meeting.

Also during the meeting, Johnnie Ball, a caseworker for Pearl River Valley Opportunity Inc., requested a part-time employee to help him handle the increasing workload at PRVO’s Picayune office. In September 2015, the board appropriated an additional $16,000 to PRVO’s Poplarville office for an additional part-time employee since the board was still making the finishing touches on the 2015-2016 budget.

Ball said he’s solely responsible for the caseloads in Picayune.

“This employee would take some of the responsibilities and share some of the workload that I have to do on a day-to-day basis, so that we can do a better job and a more efficient job,” Ball said.

Holliday made a motion to take the issue under advisement.

“This is not a no, we’re just trying to figure out a better way to help,” Holliday said.

Moeller seconded the motion, saying he will agree to a new employee, “If it’s in our power to help [PRVO] without taking away from our taxpayers.”

Hart opposed the motion, saying there are many people living under the poverty line in Mississippi who need services from PRVO, which provides financial and educational assistance to low-income residents countywide.

Also at the meeting, Pearl River County Engineer Les Dungan said he, along with the district engineer, plan to conduct the annual maintenance inspections of completed state-aid projects next week.

In December, the project received four bids, the lowest was $131,090. Dungan said they’re waiting for official confirmation from the department.

—The board approved members with the sheriff’s department to attend a testing certification in Gulfport, Mississippi from Jan. 26 to 28.

The next board meeting will be Feb. 1 at 9 a.m. inside the court facilities in Poplarville.