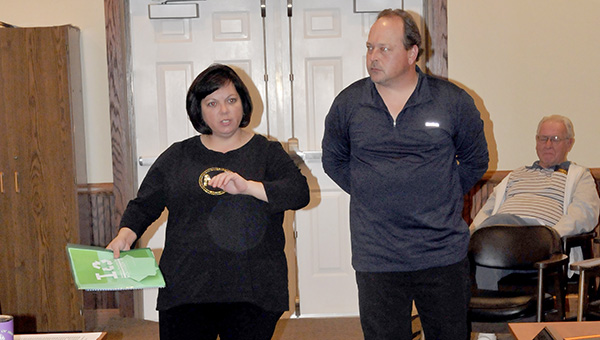 ENVIRONMENTALLY SOUND: From left, Brandie and Robert Renskowski address the Poplarville Board of Aldermen about the curbside recycling service program during Tuesday’s meeting.
Photo by Cassandra Favre

During Tuesday’s Poplarville Board of Aldermen meeting, the board heard an evaluation of the city-owned building at 101 North Main Street from local contractor Keith Lott.

In early September 2015, Public Works Director Sam Hale and code enforcer Guy Holston informed the board about the discovery of Formosan termites at the building, which was home to the Poplarville Chamber of Commerce and the Poplarville Historical Preservation Society’s museum at the time.

At the Nov. 4 meeting, the aldermen voted to have Lott remove the roof and assess the termite damage.

“There is no major structure damage,” Lott said Tuesday. “We did find the termite damage to the exterior underneath the vinyl gables and siding. Sam and I looked over the building and pinpointed the areas with minimal damage and what needs to be done.”

Lott told the board that the vinyl fascia and soffit and the oriented strand board (OSB) underneath the gables needs to be replaced.

He also told the board that the roof is fine and he only found a few rafters with termite damage.

“There’s nothing structurally wrong with this building,” Lott said. “You’ve got some damage inside. There’s no presence of termites, Sam has well taken care of that. He and I have put together a packet on what needs to be done to be the outside and I don’t think it’s going to be a great expense to the city.”

However, the inside will be the most costly, which will depend on the extent the city wants to go, with regard to items such as central air and additional electrical wiring. There was also talk of bathroom upgrades, as it needs to be brought up to ADA compliant specifications.

The board took the matter under advisement in order to research the proper method to utilize when advertising for bids for the exterior and interior projects.

Also during the meeting, Brandie and Robert Renskowski, owners of Ne1 Recycling, a curbside service provider, presented the board an outline of the services they offer.

“We provide curbside service to people in the county that have requested it and provide a bin and curbside pickup,” Brandie Renskowski. “We sell by the truckload and we do all the collecting and sorting until we have almost 800-pound bags. Education is huge. We provide a bin and the education on how get it done. We also provide a list of what all in your home is recyclable.”

Poplarville Mayor Brad Necaise said the city would need a business proposal and the opportunity to seek out information from other cities that utilize independent programs.

“There’s going to need to be more conversation,” he said. “I wanted these guys in front of you to know that this is an opportunity and curbside recycling is a great opportunity.”

No action was taken on the matter.

–– The board approved Hale’s recommendation to put a nine-year vinyl lettering on the city’s signage displaying park rules at City Park. The current lettering is peeling off. There will be some changes to the language. For instance, pets are allowed in designated areas and there will be no refund on monetary deposits for use of facilities. The city’s new logo will also be placed on top of the sign.

The next Poplarville Board of Aldermen meeting will be held on Feb. 2 in the boardroom at City Hall.