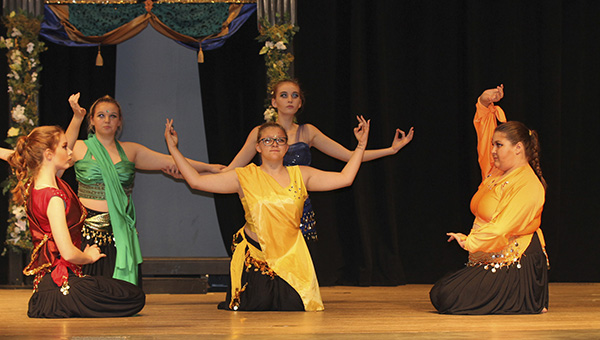 THE BLUE MASKERS: This is a scene from Pearl River Central High School’s Blue Maskers performance of “Shakuntala and the Ring of Recollection.” The group will advance to state competition and also won for best costume design.
Photo submitted

Last weekend, two high school theater groups won the opportunity to represent the county and region at the state competition.
The Pearl River Central High School Blue Maskers and Picayune Memorial High School’s High Tide Productions participated in the Mississippi Theater Association Drama Festival South Mississippi Division at the University of Southern Mississippi in Hattiesburg.
PRC’s first-year drama teacher, Amber Mauldin, said it was a moment she never expected to have and it is one of her biggest professional rewards to date.
The group placed in the top four overall, an honor that qualifies them for state competition in Meridian, which will be held Jan. 14 through 17.
The Blue Maskers performed local author Deborah Craig’s adaptation of the ancient Indian tale “Shakuntala and the Ring of Recollection.”
“It was the best performance they’ve ever done,” Mauldin said. “It was the closest thing to perfection. I couldn’t have asked for anything more. We still have a lot to work on, but we are on the right track. I’m so happy to prove myself to the school and kids. This was my first opportunity to show I’m worthy of this position.”
In addition to overall achievement, students Dane Crosby and Sam Rogers were awarded best costume design.
Crosby said he researched traditional ancient Indian clothing and also studied Hindu art and mythology.
“They combined nature, gods and goddesses into their designs,” Crosby said. “It was amazing to win. There was very tough competition as many of the shows had amazing designs. I was so happy that I could win this for my troupe.”
For the second year in a row, Dallen O’Briant won an award for his original musical composition.
“It felt awesome,” he said. “It made me feel like I could really compose music and that it wasn’t just a one-time thing. I’m honored to have this opportunity to write music and be a part of this cast. I love them all.”
Gabe Johnson won the all-star cast award for his portrayal of the play’s villain, Lord Durvasas. Johnson, who has been acting for about 10 years, said it gave him a sense of self-worth and a sense of belonging.
PMHS’ High Tide Productions was awarded many honors including a place in the top four. The theater group will be performing “The Last Illusion,” at state competition in Meridian. The play is set in the early 1920s and chronicles highlights of the life of famous illusionist Harry Houdini.
“It was one of the best performance they’ve given so far,” PMHS drama director William Rester said. “I felt that we hit all the high and low points emotionally. It was a really solid performance all around. Everyone left it all out on the stage.” As the group prepares for state competition, Rester said he tries not to make too many changes, but believes everyone discovered a few little things that they wanted to work on.”
Katy Fuller won best actress for her portrayal of Houdini’s wife, Bess.
“I was very surprised,” she said. “It was the first big part I’ve had. It makes me want to do more with the part and get even better. I’m very blessed to have this opportunity and will dig deeper into the character and get more emotional.”
High Tide Productions also won awards for technical achievement, the distinguished play award and two all-star cast awards, which were earned by Jackson Saul and Chase Giadrosich.
Saul, who portrayed Houdini, said the judges usually choose one cast member as an all-star.
“It’s cool to be recognized for the hard work we put into it,” he said. “I’m definitely still working on differentiating between older and younger Houdini to bring that contrast.”
Giadrosich portrays Martin Beck, Houdini’s manager and a 1920s style barker, an announcer that pulls the audience into the show.
“We have a such a big, great cast and they pick one,” Giadrosich said. “It’s great to be recognized. To prepare for state completion, I plan to research more of the 1920s era and vaudeville entertainment.” 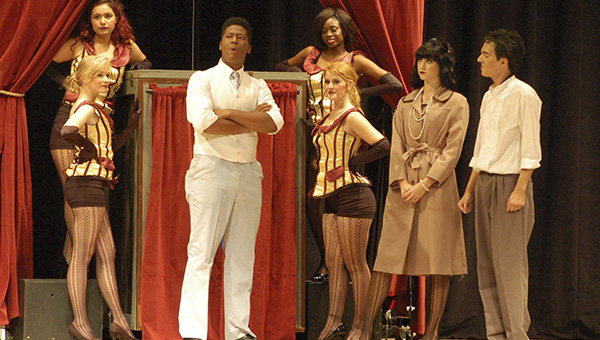 HIGH TIDE PRODUCTIONS: Picayune Memorial High School’s High Tide Productions will advance to state competition and perform “The Last Illusion,” a play about the life of famous illusionist Harry Houdini. This is a scene from the performance at last weekend’s regional competition in Hattiesburg.
Photo submitted