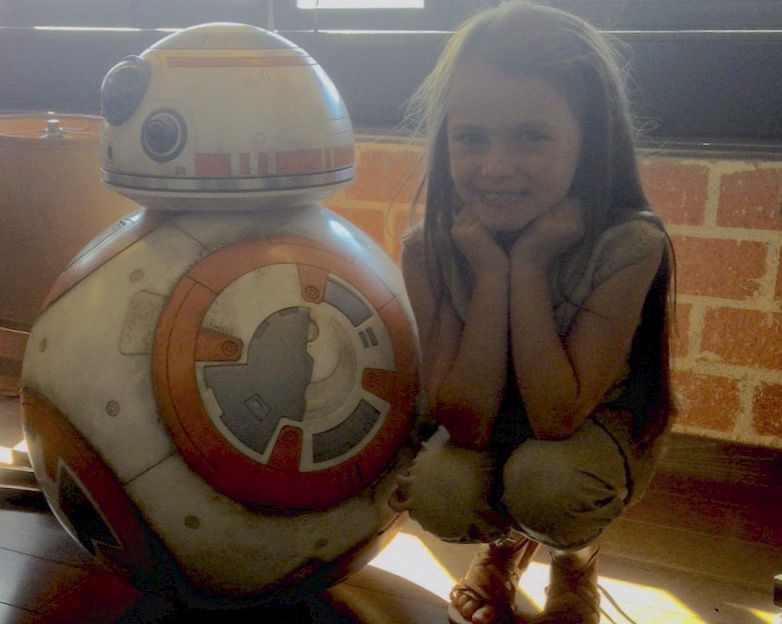 Last weekend, “Star Wars: The Force Awakens” broke records at the box office.
Not only did millions of fans catch up with their favorite characters, but got a glimpse of Hollywood newcomer, 8-year-old Picayune native Cailey Fleming.
She is the daughter of Misty and Matthew and sister to Chandler.
The straight-A third grade Pearl River Central Elementary student said she likes everything about school.
However, the dream to be a superstar began at an early age for Cailey.
“I’ve been wanting to act since I was 4,” she said. “I started last August at 7 at Launch, Model and Talent in Metairie where I learned to be confident. During the first class, I didn’t really know what to do, but they taught me a lot because I had no experience. It’s a good place to go and I think other kids should go there if they want to act.”
She also learned not to fidget during an audition and how to speak with confidence.
She was also introduced to cold reading, which is when an actor is handed a script without a lot of time to read over it, she said.
“It’s like an audition that you don’t know the words to,” Cailey said.
She attended her first audition for a movie in October 2014, signed with a New Orleans agent at Clear Talent Group South and booked her first commercial in December of the same year.
“It was a commercial for Children’s Hospital in New Orleans,” she said. “I did two scenes. In one scene I was dressed as a ballerina flower and in the second scene I got to eat real birthday cake.”
In addition to a New Orleans agent, Cailey also has an agent with CESD Talent in New York and Luber Roklin Entertainment in Los Angeles, California.
In one year, Cailey booked four films, one pilot, three commercials and a Lunchable national print film.
However, Cailey’s home is still in Picayune. She tapes her auditions in Metairie and they are sent to studios.
“I like doing all the stuff I do and I would rather stay home here and just travel back and forth,” Cailey said. “I also dance, participate in acrobatics and play basketball.”
In the pilot for, “One Mississippi,” now streaming on Amazon.com, Cailey acts alongside another Mississippi native, comedian Tig Notaro. She plays a young Tig and wore a short wig.
“I had fun with it,” Cailey said. “Tig was funny and really nice. I wore really different clothes and did a birthday scene where I played soccer with the boys.”
Cailey said she was excited when she discovered she had booked a film. However, she didn’t find out it was a Star Wars film until she arrived on set in California.
“It was fun and we filmed at the headquarters on the roof,” Cailey said. “I wore war clothes and had makeup on my arms to make it look like I was in the desert. I met Daisy Ridley, who was really nice. The director, J.J. Abrams was super nice and he sent to me to Disneyland. Every time we did a scene he would yell ‘cut’ and bring strawberries.”
Last Thursday, surrounded by family and friends, Cailey saw herself on the big screen for the first time.
“Before I saw my face, you could hear my voice, so I knew when my part was coming and then my face came on the big screen,” she said. “I was excited. It’s a good movie and people should see it.”
Cailey’s mother Misty said her daughter is amazing.
“She’s been wanting to act for years,” Misty said. “At first, I wasn’t okay with it, I was afraid of the lifestyle. It took me three years of praying before I was okay with it. So I let her try and she’s amazing, gifted and talented at what she does. I think she is really going to go far.”
On Jan. 1, residents will have a chance to meet Cailey at Acadiana Cinemas in Picayune, cinema owner Kathy Collins said.
“She will be in attendance throughout the day between movie showings to sign autographs and take pictures,” Collins said. “We are so excited and anxious to meet Cailey. We are also excited to see a resident of Picayune on the big screen in a history making movie.”
Follow Cailey on www.imdb.com.