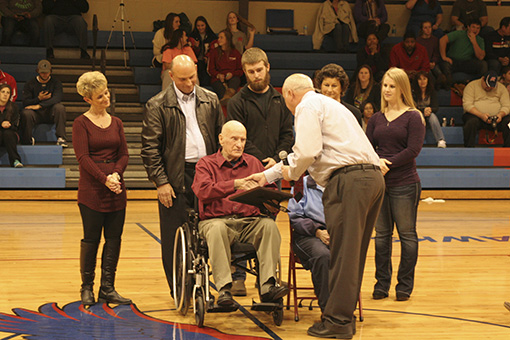 AN HONOR: Coach Roland Ladner along with his family pose at the dedicated court at Hancock North Central.

On a brisk December night, students, coaches, athletes, alumni, parents and children, all influenced in some way by Coach J. Roland Ladner, packed into the gym at Hancock North Central Elementary School to see their beloved mentor honored for his years of service by naming the basketball court Coach Roland Ladner Court.

Ladner was honored at center court with his entire family before the Hancock Poplarville boy’s game Friday.

Ladner’s resume gives insight as to why so many people are grateful for not only his basketball knowledge but also his integrity.

His statement reads: “I sincerely believe coaching is a calling as is the ministry. I believe there are and should be great carry-over values in life’s journey for these young athletes. I use the game of basketball in comparison to the game of life…We, as coaches, must commit ourselves to teaching more than just the X’s and O’s of basketball. We must be coach, teacher, father, mother and brother to our players, assuming whatever role necessary to help our players grow as human beings and mature to be assets to themselves, their family and their community.”

All of these accomplishments led to numerous professional honors. 1984, Ladner was inducted into the Mississippi Association of Coaches Hall of Fame. In 1981, he was selected as Coach of the Year in Men’s basketball in Mississippi. When he left the high school ranks in 1981, he had the most varsity boy’s basketball wins of any active coach in the United States.

At the college level, Ladner built Phillips College’s basketball program from scratch and ran it from 1981 until 1985 when it was terminated due to financial struggles.
Michael Ladner, the son of Coach Ladner, said that his father is most proud of the young people he shaped into men. Michael recalled times when his father would go above and beyond his duties as a coach.

“We’re out in the middle of nowhere in the country and a lot of the guys would have to stay after school. I can’t count the number of time he’s taken young men home in the afternoons and my mom fed them their pregame meal. And at the same time there’s been three or four guys over the years struggling at home and he took them in our home and they stayed at our house for months at a time so they could play basketball and go to school,” Ladner said.

Michael also noted that former players still seek out Coach Ladner’s advice when they need someone to talk to.

“Many, many of his former players over the past few years have come back just to say hello and talk to him. A few who have issues spring up in their lives are just like ‘I need to talk to Coach and work some things out’,” Michael said.