Supervisors bid farewell to 3 on board 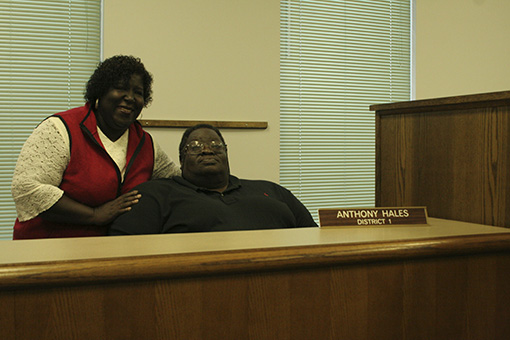 YEARS OF SERVICE: District I Supervisor Anthony Hales poses with his wife of 33 years during Tuesday’s board meeting. Donald Hart will succeed Hales as District I’s supervisor beginning Jan. 4. Photo by Ashley Collins.

The Pearl River County Board of Supervisors held their last meeting of 2015 on Tuesday. Between discussions to move forward with assisting homeowners of flood-prone homes via the hazard mitigation grant program and receiving bids for Liberty Road’s water park near Hobolochitto Creek, community members thanked the board for their work this past year.

Three board members won’t be serving the county next year. District I Supervisor Anthony Hales retired this year after more than 30 years of service. During the past election, two incumbents—District IV Supervisor J. Patrick Lee and District III Supervisor Dennis Dedeaux— were unseated.

“I’m thankful for this journey. It’s not the easiest thing to walk away from something you love,” Hales said. “It can be rough at times, but I salute the board for putting themselves out there. It’s up to you as leaders to show the community the big picture and see it yourselves. Don’t be afraid to learn and don’t be afraid to listen.”

Donald Hart succeeds Hales as the District I supervisor.

“I know I have big shoes to fill. Be patient with me. I love the people of Pearl River County and I knew I was called for public service. I want Hales to feel like he’s leaving his seat in good hands,” Hart said.

Also at the meeting, Lumpkin said they had a certified appraiser assess the

seven properties—five in Picayune and two outside the city limits­— which are prone to flooding.

After several discussions with MEMA regarding ways to implement the hazard mitigation grant program to buy out the homes, Lumpkin said his office drew out spreadsheets to distribute to the homeowners highlighting the results of the appraisals. He also said the homeowners have the option to accept the offer or not.

“In the next couple of weeks, we’re going to meet with the homeowners because some of the values weren’t what they thought it would be. They thought their homes would be worth more, but we’re going off of what the certified appraiser said. Since this is a voluntary program, they can opt out or move forward,” Lumpkin said.

The primary goal of the Hazard Mitigation Plan is “to recognize natural and man-made hazards affecting the citizens of the county and to define activities that can be implemented by the county to mitigate the effects of those hazards for the present and into the future,” according to the county’s website.

Later, County Engineer Les Dungan said they received one bid from Huey P. Stockstill, LLC, for the state-aid project that calls for the overlay and paving of three roads that include Sycamore, John Amacker and Anchor Lake. The bid was in the amount of $946,706.57. The board approved the bid.

The board decided to take the bids under advisement until they find additional funds for the project.

—The board approved the Pearl River County Sheriff’s Department to purchase a vehicle under the drug forfeiture fund.

—The board approved travel for county officials and officers to attend the MAS 2016 Legislative Conference in Jackson from Jan. 5 to Jan. 7.

—The board approved travel for employees within the tax office to attend the IAAO Course 600 Cadastral Mapping in Baton Rouge, Louisiana from Feb. 1 to Feb. 5.

The next board meeting will be Jan. 4 at 9 a.m. inside the court facilities in Poplarville.