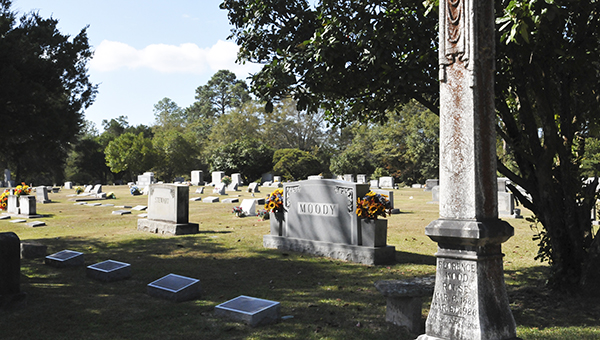 CONTINUING CARE AND MARKER PLACEMENT: The city owned cemeteries were a topic of conversation at Tuesday’s aldermen meeting.
Photo by Ashley Collins

Tuesday, the Poplarville Board of Aldermen discussed the placement of markers at city cemetery and Forest Lawn Cemetery, both of which are owned and maintained by the city.
City Clerk Jody Stuart told the board that, recently, some people have expressed concerns about how the markers have been placed
Over a period of time monuments were placed on top of other people’s plots and some of the plot owners now want them removed, Stuart said.
Stuart suggested to the board that they approve a policy regarding the city’s cemeteries, which would also address how the city handles plot acquisition on holidays and weekends and stipulate that monument placement cannot take place unless city personnel are present. The issue of urn placement in a plot also needs to be addressed, she said.
Stuart also asked City Attorney Nick Thompson who personally would be responsible for the removal of markers.
“Under property law,” he said. “It’s the plot owner’s responsibility. It would be a matter between the owner and encroacher.”
If an individual wants to know who owns a plot, the owners’ deeds are filed at both City Hall and the Pearl River County Courthouse, Stuart said.
Poplarville Mayor Brad Necaise also suggested taking the plot money and placing the funds in a certificate of deposit for the purpose of ongoing maintenance.
Thompson told the board he would research other cities’ policies and report back to the board.

–– Poplarville Police Captain Rossie Creel informed the board about recent upgrades to some of the department’s resources. Five more portable radios, the purchase of which was made possible by a Justice Assistance Grant, have been ordered, which will complete the digital upgrade, he said.
Four of the six mobiles, bought with funds from a Homeland Security grant, have been installed in all of the Crown Victoria vehicles used by the department, Creel said.
“I’ve also got one iPad mounting station for our new police vehicle and two other mounting stations for our Crown Victorias,” Creel said. “At that point, we will have wireless iPads and NCIC access in all vehicles.” There is about $1,200 to $1,500 left to spend in Homeland Security funds, he said.
–– The board approved two special event requests for Oct. 24. Both will be held at city park. The first event, Paint the Town Pink begins at 8 a.m. and the second event, a political rally for District I Supervisor candidate Donald Hart, will be held from noon to 2 p.m.
–– The board also voted to close the city’s splash pad for the cooler months on Nov. 1 and reopen the amenity on April 1.
–– Poplarville Fire Chief Jonathan Head told the board the governor has issued a statewide burn ban. The board also authorized the hiring of Alex Carnathan as a full time firefighter. Head also told the board the department raised more than $2,000 during their boot drive, which will be donated to a local family affected by breast cancer.
–– Movies on Main will be held on Oct. 27 at 6:30 p.m. on the Town Green featuring the film “Hocus Pocus.”
–– Merchants’ trick-or-treat will be held in downtown Poplarville from 3:30 p.m. to 5 p.m.
The next board of aldermen meeting will be held on Nov. 3 in the board room at City Hall at 5 p.m.