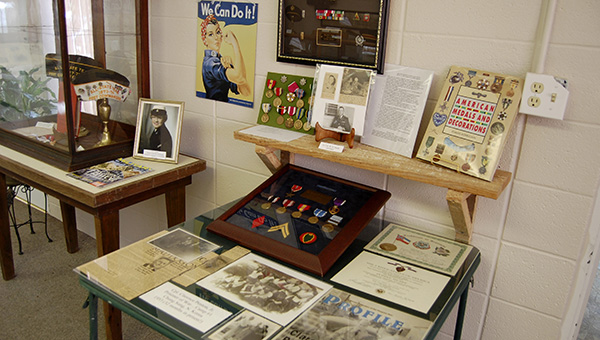 HISTORICAL VALUE: The Poplarville Historical Preservation Museum, which is housed along with the Chamber of Commerce, has been threatened with termites. The Board of Aldermen voted to begin treatment immediately. The museum, which opened last September, featured a military theme for its opening. At the moment, the theme for the museum is education.
Picayune Item File Photo

Tuesday, Poplarville’s Board of Aldermen not only heard from citizens regarding rumors of Poplarville Police Chief Charlie Fazende’s continued employment, but also took action on a termite problem at the site of the Poplarville Historical Preservation Society’s museum. The board also discussed a proposed amendment to the ordinance relating to the sale of beer and light wine.
Public Works Director Sam Hale informed board members about his discovery of termites in the city’s museum building, located at 101 N. Main St. The building is also home to the Poplarville Chamber of Commerce. Right now, the termites are only located in the museum half of the building.
“On the 20th, we had to repair a hole in the roof and found termite activity on the old part of the roof,” Hale said. “We got with Fischer Environmental and got quotes. Fischer said the termites came up through the ground through the blocks of concrete and flower beds.”
Poplarville Mayor Brad Necaise said it’s very important to make immediate decisions regarding the storage and preservation of the historic items, many of which have been donated to the museum.
Poplarville Historical Preservation Society President Joan Bassett said they can take down and pack the displays as well as move showcases to protect the valuables. The Garden Club can also dig up the flowerbeds and move them, she said.
“The only item damaged by the termites was a newspaper, and everything else seems to be okay,” Bassett said.
Necaise read aloud Fischer’s recommended treatment, which includes baiting techniques and placing above-ground and underground Sentricon stations. Another treatment option is liquid termite killer, a procedure that includes drilling holes in the concrete blocks.
Hale recommended the board go with both treatment options immediately. The longer the wait, the greater the infestation, he said.
The cost for both treatment options is $4,550, Necaise said, which the board voted to approve.
“We worked awfully hard to get the museum going,” Bassett said. “It’s brought in a lot of people from out of town and it’s an asset to this community.”
In another matter, the board discussed a proposed amendment to the city’s beer and light wine ordinance, which would afford business owners who have a privilege license to submit an application to the city for permission to sell beer and light wine through a drive-thru window. The owners would have to have a clear-cut reason as to why they wanted to sell curbside, Poplarville City Attorney Nick Thompson said.
Poplarville resident Nolan Norris spoke out against the amendment.
“I don’t feel we should make this amendment at this time,” Norris said. “It’s too new and fresh to this town. Wait a while to see how the city adapts to what you already have. Now y’all vote the way you want to, but I have a vote too in a few years, when y’all come up again, just remember that not only me, but these people sitting here, we all have a vote. Do what’s good for the city not just for what you want to vote on.”
Necaise said, as of yet, no retailer who has a license has applied for such a permit and he appreciated Norris’ comments, which would be taken to heart.
“I think that this board has been very aggressive in setting their control measures regarding how and where it’s sold,” Necaise said. “This one amendment doesn’t mean we’re going to give up our responsibility to the people who live in and around the city of Poplarville and have a business here. This is just one piece that we have visited since the referendum passed.”
Thompson also added that even if the amendment went into effect tonight, it doesn’t mean that anyone can automatically sell through a drive-thru window. Business owners would still have to apply to the city and an application would have to be approved by the city.
The board decided to take the matter under advisement.
Also during the meeting, many community members voiced their concerns and support for Fazende after hearing rumors concerning the chief being asked to resign.
Many, including Fazende, spoke on the matter. During the meeting, Fazende said he was approached after the last board meeting and offered the opportunity to resign, which he declined at the time, previous coverage states.
The meeting ended with an executive session regarding a personnel matter.
Wednesday, Necaise said no action was taken after executive session.
Fazende said Wednesday, that while no action was taken, he plans to retire at the end of the year.

In other action:
–– Poplarville Fire Chief Jonathan Head told the board that while repairs were being made to the ladder truck, the mechanics found that parts of the pulley assembly were worn out and would have to be replaced. The fire chief said he is awaiting a quote, but estimates the total cost to be around $300 for the complete assembly.
–– The board approved the addition of volunteer firefighter John Bellamy, Jr.
–– The board accepted the resignation of prosecuting attorney Buddy McDonald and appointed Tara Kellar to the position.
The next board meeting will be held Sept. 15 at 5 p.m. in the boardroom at City Hall.