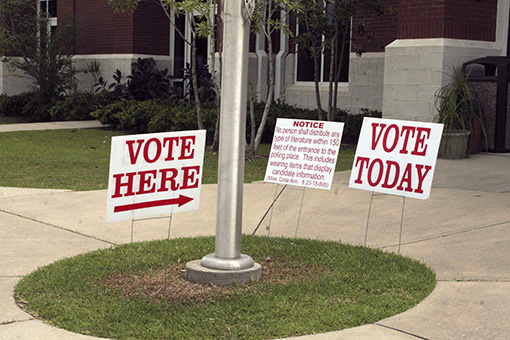 Political candidates across Mississippi are gearing up for the upcoming runoff election on Aug. 25.

As a result of the primary election that took place earlier this month, several candidates running on the county and state level will face one another in the runoffs in order to qualify to represent their party on Election Day in November.

Johnson has served as the Chancery Clerk for the past 16 years. He hopes residents choose him on Election Day for his experience dealing with county matters.

“I just hope to continue the service that I’ve been doing all these years. I love my job because it’s the people’s office and I just serve in it,” Johnson said.

In order to prepare for the upcoming runoffs, Johnson, along with family and friends, is walking door-to-door across the county speaking to residents and asking them for their vote. Johnson said the county has several projects lined up, including the implementation of an e-filing court records system in January that will allow residents to access those public records at home.

In an emailed statement, Johnson’s opponent, Bowman, said she’s running for Chancery Clerk in order to move the county toward a “brighter and more prosperous future.”

“I’m running for this office because I have a sincere belief it is time for a citizen to step up and be a voice of conservative influence in our local government. I firmly believe government exists to serve people, not the other way around,” Bowman said.

Bowman has nearly nine years of experience dealing with public relations while working with NASA as a public affairs specialist and newspaper editor. For the past four years, she’s worked in the civil and criminal court division within the Pearl River County Circuit Court.

For the Circuit Clerk office, Nance Fitzpatrick Stokes, who led with 3,556 votes in the primary election, will run against Sian Fazende who received 2,465 votes.

If chosen, Dedeaux said he plans to work on keeping taxes low and conducting more roadwork, recreation and maintenance projects across the county.

For the position of Constable Southeast, incumbent Ray Merle Bennett, who led with 1,236 votes in the primary election, will face ‘Dusty’ Dillard, Jr., with 794 votes and Shane M. Edgar with 786 votes, according to previous Item coverage.

On a state level, Mike Tyson, who received 1,218 votes in the primary election, will race against J.M. ‘Mike’ Seymour with 514 votes for the Senate District 47 seat.

S.F. ‘Sam’ Britton, who received 2,751 votes in the primary election, will face Tony Smith with 5,129 votes in a run-off for Public Service Commissioner.

All polling locations across the county will be open from 7 a.m. to 7 p.m. on Tuesday to give registered voters the opportunity to make their vote count.

Voter turnout for the primary election on Aug. 4 was 28.43 percent, according to previous Item coverage.