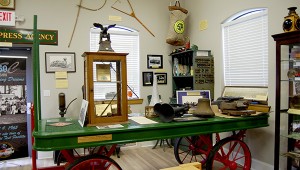 Photo by Cassandra Favre
This antique wagon, restored by the Dufilho triplets, is a railway express baggage wagon that is housed in the Lower Pearl River Valley Transportation Museum in Picayune’s Intermodal Tourist Center and Museum on Hwy 11 South.

Throughout the years there have been many modes of transportation from horse and buggy to cars, trains and planes.

Today, the majority of travelers prefer planes and automobiles to reach their desired destinations.

However, there are many that utilize the locomotive and there is an Amtrak train stop in the heart of Picayune.

According to history.org, the railroad was first created in Great Britain.  George Stephenson applied steam technology of the day and developed the world’s first successful locomotive in the early 19th century. The first engines and rails utilized in the United States were imported from England until the Civil War.

The first railroad built in the United States in 1830, the website states, was the Baltimore and Ohio Railroad. The railroad is considered to be one of the most important developments of the Industrial Revolution. It brought major social, economic and political change.

The Lower Pearl River Valley Transportation Museum is also located in the station. The museum houses many historical railway artifacts donated by local families including the Crosbys, Gamills and Pentons, Beebe said.

According to museum literature, Picayune native Eliza Jane Poitevent organized a campaign during the 1850s to have the New Orleans and North Eastern Railroad place a railway through the area. The railroad came and furthered the development of the area’s timber industry.

The museum houses a railway express baggage wagon that was restored by Brian, Karl and David Dufilho, Beebe said. In the museum, there are railroad spikes, a historic train whistle and many other railway treasures to view.

In addition to the museum, the tourist center is also home to Picayune Main Street and the city’s zoning, permits and code enforcement office, Beebe said.

The station is located at 200 Highway 11 South.

Learn more about the Amtrak Crescent at www.amtrak.com/crescent-train.