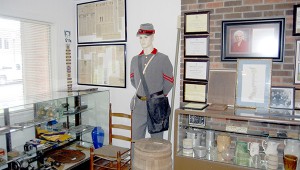 Photo by Cassandra Favre
The Hilda Hoffmann Memorial Archive, Inc. is also home to a museum filled with historical artifacts. Pictured is a Confederate soldier’s uniform worn during the Civil War.

Families have been living in Pearl River County for generations.

Each family has their own unique members, stories and history.

Narratives about days gone by are passed down from generation to generation.

However, what happens when there is a desire to know a family’s history and there are no surviving members to tell it?

People can visit the Hilda Hoffmann Memorial Archive, Inc. in Picayune to learn about their ancestors who inhabited this area long ago.

Don Wicks is a founding member of the archives and said Hoffmann possessed a burning desire to research the families who lived in this county.

Hoffmann was born in 1918 and raised in Picayune, Wicks said. When she was a teenager, recording the graves of her Stockstill ancestors at the Stockstill cemetery, she looked around at the other graves and wondered who all the other people were.

“After graduating high school Hoffmann worked at a shipyard in Pascagoula,” Wicks said. “But, in reality, she was a Navy Secret Service courier during World War II.”

One story Hoffmann told, Wicks said, was that before climbing aboard a ship via a ladder wearing skirt with men following behind, she stopped and thought for a minute and then said, “For God and country.” Hoffmann described herself as a flaming redhead with a body to die for, Wicks said.

After World War II Hoffmann retired and worked on genealogies full time, Wicks said. This was the pre-computer era so all correspondence and histories were handwritten, which required a lot of telephone and legwork.

Hoffmann died on July 4, 2010, Wicks said. She left behind more than 200 boxes of binders plus five filing cabinets overflowing with genealogical and historical information about the families of Pearl River County, Wicks said.

The legal authority of the records was given to Sara Sheldon of Texas who reached out to Helen Clunie, a native of Pearl River County, Wicks said. Clunie transferred the records to a storage facility in Walkiah.

Wicks, a self-proclaimed history buff, said he got involved with Hoffmann’s records in August 2010.

“I was worried about hurricanes,” Wicks said. “The records were moved to a storage facility at NASA until a more proper place could be found.”

Soon after, Wicks said the search began for a facility in Picayune to house and display the records for public use. Clunie had two certificates of deposit that had reached maturity and donated those funds for the use of the current building.

“We had an extra space and needed an attraction,” Wicks said. “There is a museum filled with historic artifacts including, hearing aids, a toaster, an automatic piano roll, sewing machine and a Confederate Civil War uniform.”

The archive is staffed by a group of volunteers eager to help people trace their genealogical roots, Wicks said. About 89 percent of the records relate to Picayune and Pearl River County families and the remaining percentage of the archives is associated with Gulf Coast and Louisiana regional families, Wicks said.

The Hoffmann archive is located at 301 Williams Ave.

The archive is a non-profit, Wicks said. There is a Hilda Hoffmann Memorial Archive organization people can join for an annual fee of $25.

“Anyone is welcome to lend or donate historical artifacts to the museum as well as family histories to the archive for preservation,” Wicks said.

To learn more about the archives, visit the website at www.hildaHoffmannarchive.org.